Lawrence and Aaronsohn: T. E. Lawrence, Aaron Aaronsohn, and the Seeds of the Arab-Israeli Conflict 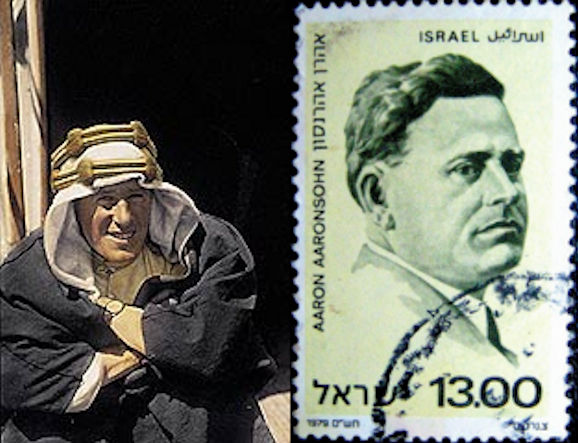 This is the coordinated history of two figures who were pivotal against the Turks in the Great War, one famous, and one generally unknown today. While very different individuals with very different goals, Thomas Edward Lawrence, "Lawrence of Arabia," the Oxford-trained Arabic-speaking archaeologist who became a self-taught guerrilla warfare innovator, and Aaron Aaronsohn, who immigrated to Palestine at age six, a self-educated agronomist and geologist who developed and financed an espionage network, both men shared in the task of ending the Ottoman dominance of Palestine and Arabia.
While the activities of T. E. Lawrence are well documented, those of Aaron Aaronshn are virtually unknown outside of the history of Israel. After his discovery of a primitive form of wheat, which could be used to rejuvenate wheat stocks to give them greater resistance to rust and drought, he became a celebrity both in agronomy and in archaeology. Visitors came to see him from all over the world. He gave talks and seminars in such places as France, Germany, Egypt, and Turkey. He spent two years in the United States as a guest of the Department of Agriculture. During this time he met well-known Americans some of whom were sympathetic to his Zionist goals. He was even offered the chair of the Department of Agriculture of the University of California. By the time he returned home, his contacts had established an American corporation to run an experimental agricultural research station in Palestine. Many prominent Americans, such as Julius Rosenwald, founder of Sears Roebuck & Co., Henry Morgenthau, Ambassador to the Sublime Porte, and Henrietta Szold, founder of Hadassah, were trustees.

To staff the station he recruited practical and enthusiastic Zionists like himself. These included his family members. As part of the operation of the station, Aaronsohn and his staff traveled extensively around Palestine, developing skills of observation that worked equally well for espionage as for agriculture.

When war broke out, Jews were ordered into labor battalions, and the research station was stripped of everything that could be carried away. The Turks were making the functions of ordinary life quite difficult. Aaronsohn came to the conclusion that the only hope for the Jews was a British victory. In October 1916, Aaronsohn, in cooperation with MI5, arranged to be secretly transported to London, where he convinced the British of his knowledge of the local terrain and the logistics of the Turkish forces. He wanted to cooperate with them in the gathering of intelligence. A few months later, at the Savoy Hotel in Cairo, Aaronshohn met T. E. Lawrence. Aaronsohn, with an ego certainly equal to Lawrence's, noted in his diary his impression that the young lieutenant was "very well informed on [the] Palestine question - but rather conceited."

For the next three years Lawrence and Aaronsohn were to cooperate and conflict with each other, one to advocate and lead the future of the Arabs, the other to lay the foundations for the Jewish State. Of course, both of them were in conflict with the plans of the Great powers for whom they supposedly served. Aaronsohn's organization, NILI, Hebrew abbreviation for "The Glory of Israel Does Not Deceive," was run locally by his sister, Sarah, who was eventually arrested and tortured. During the course of the war NILI gave the British detailed information about the terrain, climate, and economic situation in Palestine along with the disposition, equipment, and preparation of the Turkish army.


Each of these strong-willed men had different views as to the future of Palestine. Even though he acknowledged the positive aspects of Jewish settlement in the area, Lawrence seemed to echo the general anti-Semitism of the British officer corps, warning against the extent of the Zionist goals advocated by Aaronsohn. Aaronsohn thought that Lawrence had experienced too much success at an early age, and that "he was infatuated with himself." The conflict between Lawrence and Aaronsohn continued at the Paris Peace Conference. The sophisticated and charming Lawrence was impressive in presenting the need for the Arabs to control the region, while Aaronsohn, with his powerful American friends, such as Felix Frankfurter, Henry Morgenthau, and Justice Louis Brandeis, vainly struggled to define and organize the Zionist position. Paradoxically, there was a moment in which Feisal, with Lawrence's assistance, agreed that the Arab and Zionist movements "complete one another." How different history could have been had that understanding been made a reality.

Of course, neither Lawrence nor Aaronsohn achieved their goal. Aaronsohn was finally authorized to draw up a map of Palestine with practical borders, but he was killed on a flight from London on May 15, 1919, bringing it to the Peace Conference. By this time Lawrence had left the conference. Coincidentally, he was injured in a plane crash in Rome on 17 May 1919. The book focuses equally on both men's activities during and immediately after the war. There are many better biographies of Lawrence, but Lawrence and Aaronsohn becomes a fascinating read when looking at these great men in parallel. They were men representative of their culture. Both burned with the enthusiasm and confidence successfully to carry out activities of which no one else proved capable. Ronald Florence, the author of several non-fiction and fiction books, among which is the novel Zeppelin, probably favors the lesser-known Aaronsohn over the much-publicized Lawrence, but manages to put both men into the context of the larger picture.