The biographer of General George C. Marshall, Forrest Pogue, published the preliminary interviews he made with his subject in 1957.  In Tapes 6 and 7, which cover Marshall's time with the AEF during which he played critical roles as the chief of operations of the 1st Division and then the First Army, Pogue asked a number of questions about General John J. Pershing with whom General Marshall had a long relationship during and after the war. (Pershing lived until 1948.)  Here is a selection of Marshall's memories of his old chief. I've regrouped comments that deal with similar themes and indicated the interviewer's question when necessary. 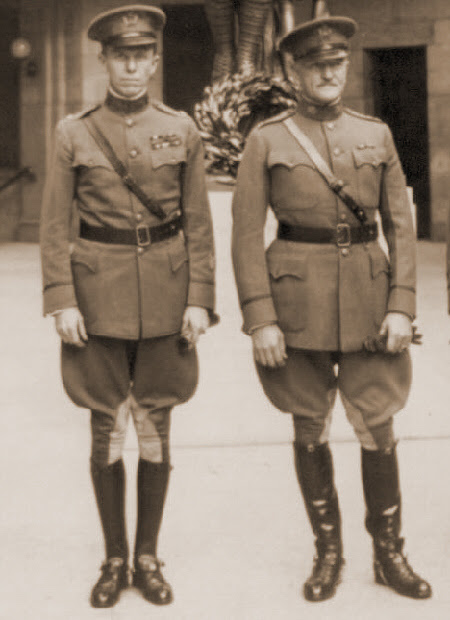 General Pershing and Colonel Marshall After the War

The Pershing Style of Leadership

FP Question:  How did Pershing operate as top American commander? What is your estimate of him as a leader?

General Pershing as a leader always dominated any gathering where he was. He was a tremendous driver, if necessary; a very kindly, likable man on off-duty status, but very stern on a duty basis.

General Pershing, as top commander, operated very largely through his operational staff — that was General Fox Conner, who was the head of the G-3 organization — so far as fighting was concerned. He would make a temporary headquarters at the front. And, of course, for quite a long time he commanded the First Army before it was split up into two armies, and then he commanded the group of armies. But he would either live on his train or otherwise get disposed up on the battle front in order to be near the fighting and continue to command. Every now and then he would have to go off to Paris when some momentous meeting would occur.

I have never seen a man who could listen to as much criticism, as long as it was constructive criticism and wasn't just being irritable or something of that sort. You could talk to him like he was discussing somebody in the next county and yet you were talking about him personally. It might be about a social thing, certainly about an official thing. You could say what you pleased as long as it was straight, constructive criticism. He did not hold it against you for an instant. I never saw another commander that I could do that with. Their sensitivity clouded them up so it just wouldn't work. I've seen some that I could be very frank with, but I never could be frank to the degree that I could with General Pershing.

FP Question:  I have read statements that you absorbed from General Pershing his insistence on "spit and polish" and strong discipline. Is this true?

I don't think I learned from him the spit and polish part. I knew how to do that long before I ever saw him. It has a decided place and is pretty much evidence of the general state of discipline of the command. The point is when it's overdone, of course, it's harmful as anything is, as a rule, that is harmful and that would be particularly harmful if it took away a lot of time from the other training.

I might accentuate the fact that [General Pershing] was very delightful, very delightful to go along with when we weren't working. He was almost boyish in his reactions and we would have a very pleasant time. The minute we came to work, he then was the very serious-minded, you might say almost implacable executive.

FP Question:  I understand that General Pershing wanted to go on to Berlin. What was your own view?

At the time of General Pershing's problem of maybe going on to Berlin, one of the great troubles was there wasn't the transport. The horses were all gone, largely. When they started the [occupation] march into Germany, I had to unhorse brigade after brigade of artillery and leave them on foot near the railheads and take their horses for the units that were going into Germany. We were very hard put in those respects, and if the battle had been carried on into Berlin...

I think early in General Pershing's period of return from France, some of his friends deluded him into this presidential aspect. I know one group came up from Tennessee and I sent them back home. He was away at the time and he was furious with me. I didn't even consult him. I knew pretty well what the general reactions were, and I thought it was a shame that he might in some way cut down his prestige by being involved in that sort of a thing unless it was almost by acclamation.

FP Question:  What was the impact of General Pershing on the U.S. Army? Did he raise the soldierly standards of the army by his insistence on discipline?

I think he did raise the standards of the army by his insistence on [his] type of discipline. Very naturally, he would. He was a very imposing and impressive man.