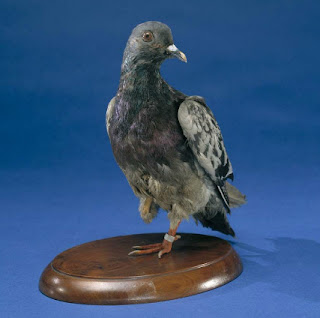 Cher Ami was a registered Black Check cock carrier pigeon, one of the 600 birds owned and flown by the U.S. Army Signal Corps in France during World War I. She delivered 12 important messages within the American sector at Verdun; on her last mission, 4 October 1918, she was shot through the breast and leg by enemy fire but still managed to return to her loft with a message capsule dangling from the wounded leg. The message Cher Ami carried was from Major Charles S. Whittlesey's "Lost Battalion" of the 77th Infantry Division that had been isolated from other American forces. The message brought about the relief of the 194 survivors of the battalion, and they were safe behind American lines shortly after the message was received.

For her heroic service, Cher Ami was awarded the French "Croix de Guerre" with palm. She was returned to the United States and died at Fort Monmouth, NJ, on 13 June 1919, as a result of her wounds. Cher Ami was later inducted into the Racing Pigeon Hall of Fame in 1931 and received a gold medal from the Organized Bodies of American Pigeon Fanciers in recognition of her extraordinary service during  the First World War.