Tomorrow: A Centennial Remembrance of the Pershing Family Tragedy in San Francisco 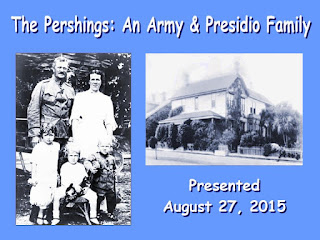 On 27 August 1915, while Brigadier General John J. Pershing was deployed in Texas with his command, the 8th Infantry Brigade, the upper story of his quarters at the San Francisco Presidio suffered a severe fire set off by a coal-fired stove. In the fire, Mrs. Pershing (Helen Frances) and three daughters — Mary (6), Anne (7), and Helen (8) — all perished. Pershing's son, Warren (5), was on a lower floor and escaped with the help of a soldier. This was the great tragedy of Pershing's life.

On 27 August 2015 the World War One Historical Association will remember the Pershing family tragedy with a public wreath laying at Pershing Square in the Presidio of San Francisco at 2 p.m. An informational program in the Presidio Officers’ Club follows at 2:15 p.m.  Publisher Michael Hanlon and National Park Service Historian Stephen Haller will present an overview of Brigadier General John Pershing’s career, the events of the Pershing house fire and highlight World War One and the Presidio of San Francisco. Major General Alfred Valenzuela, United States Army, Ret., World War One Centennial Commissioner, will discuss the importance of military families.

Made possible by the support of: