Remembering a Veteran: Hero, General and Fatality of the First Day on the Somme – Bertie Prowse 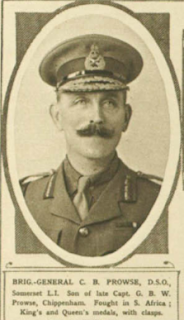 Brigadier-General Charles Bertie Prowse, DSO (1869–1916), commander of the 11th Infantry Brigade was the senior British officer killed on the first day of the Battle of the Somme.  He had fought earlier at Le Cateau, the Battle of the Marne, and with distinction at the First Battle of Ypres.

Elegant Prowse Point Cemetery just north of Ploegstreert Wood is the only cemetery in Ypres Salient named after an individual. The cemetery is the site of the stand by the 1st Battalion Hampshire Regiment and the 1st Battalion the Somerset Light Infantry in October 1914, which featured the heroism of (then) Major Prowse of the Somersets.

His leadership in that action was of such a character that the location on future trench maps was simply designated as "Prowse Point." Succeeding units at the location started a cemetery and gave it the name of the location on their maps, likely having no familiarity with Prowse himself.

Meanwhile, the charismatic and inspiring Prowse rose from major to brigadier in nine months and in April 1915 was given command of the 11th Brigade, 4th Division. On 1 July 1916 the division attacked north of Beaumont Hamel and Prowse's men captured a German trench.  While attempting to re-establish his brigade headquarters in the trench, he was killed by machine gun fire from Ridge Redoubt.  He is buried at Louvencourt Military Cemetery on the Somme battlefield.

Prowse's elder brother Captain Cecil Irby Prowse had died a month earlier when his ship the battlecruiser HMS Queen Mary was sunk at the Battle of Jutland.