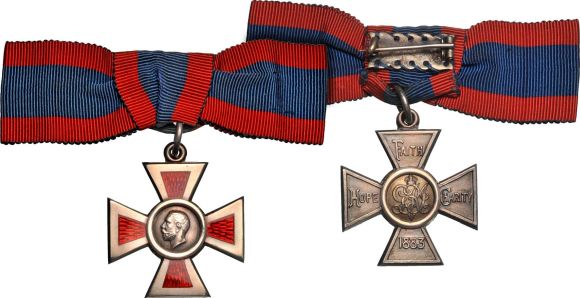 The Royal Red Cross (RRC) is bestowed by the British Crown exclusively upon nurses. Established by Royal Warrant of Queen Victoria on 27 April 1883, the RRC is the second oldest decoration in the British scheme, following the Victoria Cross (VC) which was created on 29 January 1856. The RRC is distinctly different from the Red Cross medal, granted by the British Red Cross to a Red Cross nurse for long service.

The RRC is a prestigious decoration; to date, it has been awarded 8,969 times, with the first going to Florence Nightingale. The RRC was often called “The Nurse’s VC”, since nurses were ineligible for the VC. Victoria’s instruction to Parliament was:

To confer the decoration upon any ladies, whether subjects or foreign persons, for zeal and devotion in providing for, and nursing, sick and wounded sailors, soldiers, and others with the army in the field, on board ship or in hospitals.

Reflecting change in the profession, males became eligible in 1977. Over the succeeding 135 years other aspects of the qualifications have been interpreted and tweaked. Today those eligible are qualified nurses, serving with an officially recognized military or civilian medical service, who have either shown "exceptional devotion and competence in performance of actual nursing duty over a sustained period" or performed a "very exceptional act of bravery and devotion to duty."

The award was expanded in 1917 to two classes—nursing assistants and VADs were eligible for the 2nd Class (until 1920). Later the classes were renamed "Full" and "Associate" Members, and the abbreviation for an Associate is ARRC.

One of these RRC recipients was Lillian Sarah McKnight, from Cavalier County, North Dakota. She was born on 30 September 1886 in Leaskdale, Ontario. Her family moved to a farm in North Dakota in 1887.

Lillian’s account of her war service is included in North Dakota Nurses Over There, by Grace E.F. Holmes, MD, Professor Emerita at the University of Kansas Medical Center, along with the stories of 224 other nurses from the Roughrider State.

Lillian begins her story with this preamble:

At the time that war was declared, I was nursing at Minot, North Dakota. I enrolled with the Red Cross at once at Grand Forks. The memories of an army nurse summed up in the short sketch that follows are taken from my diary. This recalls many memories of glad days and sad days, good times and hard times, friends and enemies. Beautiful stretches of foreign country and desolate wastes of the war district, the meeting of some wonderful people, so many I shall never remember them all…

She received her Red Cross appointment on 3 November 1917 and was sworn into the Army on 2 January 1918. She proceeded at once to New York for training and kitting out and was assigned to the First Detachable Unit, which was made up of 100 nurses not assigned to a U.S. Base Hospital unit. Her group departed for France on the SS Orduña, leaving on 1 February and arriving at Liverpool on 17 February. Two days later they went over to Le Havre and were sent to British hospitals. Lillian was one of the four assigned to Stationary Hospital No. 3, a 1,200-bed facility located at a former convent near Rouen. Lillian was on the surgical floor, in charge of 78 beds.

Frequently they had as many as 2,000 patients, sometimes running out of space. Lillian recounted this experience:

One night my ward with filled when they brought in about thirty patients...and we had to place them on the floor. I said to one boy [Lillian was 33 at the time]…“Buddy, I’m sorry we haven’t a bed for you.” His answer was “Sister, this is the first time I have been comfortable in months—just let me rest.” That was the type our soldier patients were.

The hospital was swamped by the German spring offensive called Operation Michael. At one time they were only 16 miles from the fighting, and they could hear the guns and see the flashes, which Lillian described as like "a bad electrical storm". As the British troops moved forward, the nurses would try to go to the road to call out "Goodbye and good luck," to which some would reply "Goodbye, Sister, I’ll be back in a few days. Have a bed for me."

After the offensive, the Germans began intensive night bombing around Rouen, which meant caring for the patients in the dark and sheltering in dugouts. When the Armistice was announced, one of her patients said "Well, no more over the top and good luck." Although the war was over, nursing was not. Her British hospital slowly emptied out as patients died or were sent to the U.K., and eventually she was transferred to U.S. Base Hospital 110 at Mars-sur-Allier.

Lillian left St. Nazaire on 12 April 1919 on the SS Ryjndam and arrived at Newport News on 26 April. Eventually she returned to North Dakota and received her discharge on 21 July  1919, having served about 18 ½ months, long for a U.S. Army nurse in WWI.

In 1924, while working as a nurse for Pillsbury Mills in Minneapolis, she married Joe Weir, a regular Army soldier, who was listed as retired in 1930. She is known to have lived in Indiana and Florida as well. An LDS family history entry says that she was called “Lil” in the family, and she sometimes used “Sarah Lillian” rather than her birth names. Also stated was that she was a shrewd investor and generous to her nephews and nieces. She passed away in Miami Beach on 8 April 1976 and is listed as buried in Cavalier County.

North Dakota Nurses Over There can be purchased through the publisher, the American Legion Auxiliary, Department of North Dakota, at its website: ndala.org.