[On 1 November 1918] the artillery acquitted itself magnificently, the barrages being so well coordinated and so dense that the enemy was overwhelmed and quickly submerged by the rapid onslaught of the infantry.

The Meuse-Argonne Offensive, launched on 26 September 1918, was the largest battle ever fought by American arms. The initial advance through the sector's well-fortified, densely forested, and hilly terrain went slowly. By mid-October the U.S. First Army was bogged down along a 25-mile front still facing strong German positions. The offensive's strategic objective, the rail center of Sedan, was still unthreatened. Other dynamics, however, were in play. General Pershing, to his credit, accepted he had reached a limit to his "span of control." He had too many responsibilities to focus solely on consummating the Argonne campaign. He chose wisely in selecting Hunter Liggett to replace him as commander of the First Army.

Additionally, senior officers who had distinguished themselves at the divisional level—men who had learned the weaknesses of the official AEF doctrine and were determined to find new solutions—were raised to critical posts. Most notable were three future army chiefs of staff: Major Generals Charles Summerall and John Hines, named to command the V and III Corps, respectively, and Colonel George Marshall, operations chief (G-3) for the First Army. 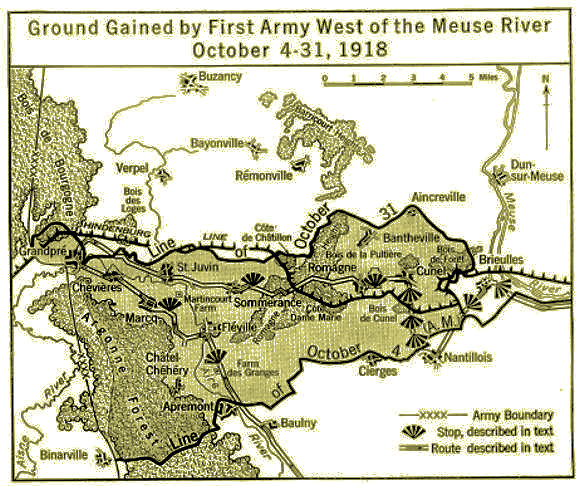 This new team came together just after Liggett assumed First Army command on 15 October 1918. In two weeks—while still mounting local attacks throughout the Argonne region—they would conceive, plan and mount on 1 November the most successful American attack of the Great War. Within a week, a victorious First Army would find itself on the heights dominating Sedan, shifting its attention to the east for its next push through the Metz corridor toward the Rhine.

The attack of 1 November was the most important and influential operation of the war for the American military. It convinced the future leaders, thinkers, and commanders of the army that the best way to take objectives and keep casualties to a minimum was to overwhelm the enemy with firepower. The legacy of the 1 November attack lived on to and after the Second World War, helping define a new and unique "American Way of War."

Three major artillery employment problems plagued the first phases of the campaign. The first was that plans called for the infantry to continue its initial attack all the way to distant objectives that were surely going to be beyond the range of the supporting artillery. Pershing and his staff were clearly counting on their infantry, some of whom were seeing their first combat, being able to successfully carry those distant objectives with little or no artillery support.

The second problem was that the attacking corps and divisions attempted to make such a quick, deep penetration without using one of the most tactically decisive weapons of the German Army's spring offensives—gas. Smothering the defending forces with tons of gases of all types was an integral part of each one of Germany's initially successful spring offensives in 1918. Pershing had included a massive gas bombardment in his initial plan for the 26 September attack. Unfortunately, the AEF could not secure all the gas shells that it needed to carry out the plan. 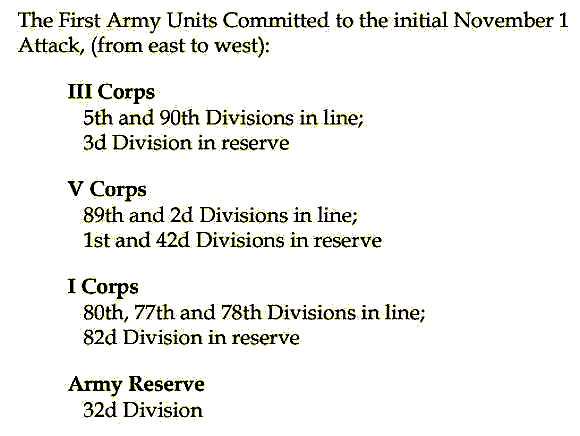 Additionally, the decision as to when, where and how to use the gas that was available was rightfully left to the corps and division commanders, and they, due to unfamiliarity with the weapon, an almost inexplicable fear of retaliation and an inflated expectation of what the infantry could accomplish on its own, did not carry through on Pershing's plan for using gas.

The third problem was that the army and corps artillery groups were not used to maximum effect in either  counter-battery against the German guns or in direct support of the infantry advance with an additional rolling barrage. Due to the expectations of many high-ranking AEF officers that aggressive infantrymen would be able to make successful attacks without the support of heavy artillery and to the fear that the use of heavy guns in an infantry support role would lead to a rash of friendly-fire incidents, the corps and army guns were prohibited from firing on positions close enough to the advancing infantry to be of any practical use to them.

These errors, combined with the inexperience of the combat divisions, their unfamiliarity with the Argonne's harsh terrain and the lack of suitable roads, led to the horrific losses and small gains of the first weeks of the offensive.

Upon taking his new command, General Liggett began immediately to make changes tailored to solve the problems that had plagued the earlier phases of the offensive. Soon after, on 19 October, Allied Generalissimo Marshal Foch issued general instructions for the continuation of the offensive west of the Meuse.

Two days later Pershing directed that First Army prepare to carry out its portion of the attack. After some coordination with the French commander in the Champagne on the left flank, D-Day was set for 1 November. In his official report, General Liggett  summarized the operation:

The primary purpose of the attack of the First Army and the French Fourth Army was, to cut the great Carignan-Sedan-Mezieres railroad that supported all the German forces to the west. The first, most important immediate objective of the First Army the heights of Barricourt, whose capture would force the German Army in the sector to withdraw behind the Meuse. The American subsequent advance would then both threatened Sedan and allow a redirected axis of attack across the Meuse River into the Metz corridor for the First Army for launching future operations.

This opening success stemmed from the most comprehensive firepower  employment plan that the AEF had ever seen. Each of the three attacking Corps were supported by unprecedented massed artillery.  In the V Corps sector alone, the 2nd Division had 236 divisional guns, the 89th Division had 208 guns, and they shared 152 corps guns, including the dedicated army groups that were put under corps direction. This was spread on an eight-kilometer front, giving the corps an artillery density of one 75mm gun for every 29 meters, a 155mm or 8-inch howitzer for every 39 meters, and a 105mm or 155mm gun for every 69 meters of front. The division also had a battery (12) of 6-inch Newton mortars and a number of gas projectors. Although the 1st and 42nd Divisions were in reserve, V Corps commander, MG Charles Summerall ordered their artillery brigades to join that of the 2nd Division to support its attack and the brigades of other reserve divisions to support the 89th. When the dedicated corps and army batteries are included, each V Corps division advanced with the support of more than 300 guns and howitzers.

Everything was in place well in advance of the jump-off time of 0530 hrs. During the artillery preparation that  began promptly at 0330 hrs, all the guns opened up on their German targets, namely, batteries and those infantry positions that were able to deliver fire upon American infantry at their starting positions. Eighty gas projectors also fired lethal chemicals on known machine gun nests, observation posts, and organized shell holes. Ten minutes before H-Hour, the standing barrage was put down in front of the German forward positions, as was a thick smoke screen to hide the American infantry moving up to the barrage. At 0530 hrs. the barrage rolled forward, and the attacking infantry battalions began their advance, assisted by tanks.

The first day's attack was an unequivocal success; in the central V Corps sector the 2nd Division had broken through the enemy's main line of resistance, advanced nine kilometers, and had suffered light casualties Tomorrow,  to see exactly how the barrage affected the attack, we will examine how the opening barrage of 1 November was viewed by the 2nd Division men and commanders.

Go to Part 2 of this story on Roads to the Great War presented 10 February 2022.