The latest National Geographic arrived in the mail the other day, and it features the restoration work being performed on the world's most famous cathedral.  Notre Dame Cathedral, was also wounded in action during the First World War. In 1914 more than two dozen German shells hit the cathedral and the wooden scaffolding was set on fire, which in turn lit the oak of the roof. The lead used to seal the roof melted, which in turn set the wooden pews on fire. Stained glass windows and pillars and statuary were destroyed.

Because of its central location, was in peril for the whole war and required special wartime protection.  After one bomb raid that dropped three explosives close to the cathedral grounds, the Paris prelate, Cardinal Amette, sent a protest directly to the Kaiser.  The threat of the Paris Gun of 1918 raised further concerns.

Notre Dame, of course, survived both world wars, and its bells rang out to celebrate the end of the First World War and the liberation of Paris in 1944 during the Second World War. 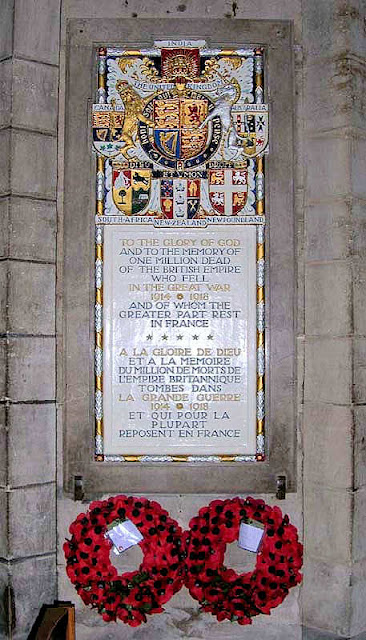 Under the transept is one of the memorial plaques found throughout the battlefields of the war honoring the one million British Empire dead, the greater part of whom rest in France.