Comments on the Film War Horse from Author Jacqueline Winspear


I had already read War Horse by Michael Morpugo years ago and thought it excellent, as the story seemed to be pitch perfect for the age range it was intended for—children/young adult. Morpugo wrote the book for younger readers to give a sense of what war is all about and chose to do it through the story of a horse who was conscripted. Of those requisitioned for battle duties during the 1914–18 war, almost 500,000 from Britain alone were killed, one for every two men lost in the combined British and Commonwealth armies. It was an edgy book with a grand tale well told—and without being sappy.

Two years ago I went to see the stage production in London, and I was just amazed. Within seconds you forgot the horses were really very sophisticated puppets and you believed them to be real—again, every aspect of the production was pitch perfect. Audience attention never faltered, and the play gave a sense of the cost of the Great War and never slipped into gratuitous emotional string pulling. The lighter moments were not so light as to be flippant and distracting, which happened in the movie. I had great hopes for the film, but I have to say I was so very disappointed.

Much was lost in the film in order to gain the greater audience offered by a PG13 designation—one hardly had a sense that this was a war that cost the lives of some ten million men (historian Niall Ferguson puts combined military and civilian losses at approximately 18 million). There were several potentially very poignant moments that were spoiled by overwrought emotion in dialogue, cinematography, and musical soundtrack. One of the most significant scenes—when the British soldier met a German in no-mans-land to free the horse entangled in barbed wire—was diminished by the addition of humor—after German called for another wire cutter, about half a dozen came flying over the parapet. This slapstick to elicit laughs from the audience was a real waste of a pivotal point in the story.

For those unfamiliar with the book and, especially, the stage production, the film will be touching and perhaps heart-wrenching. A few early reviewers thought Steven Spielberg had rushed the film production, to meet the deadline for release to be an Oscar contender. If that's so, it's a shame, though to be fair, Spielberg cannot tell a bad story. Years ago I asked a friend if she'd enjoyed the movie adaptation of The Horse Whisperer, which had just been released; at that point I had yet to see it. She was thoughtful then said, "You know, it was a good movie—but it could have been a great movie." I feel the same way about War Horse—especially as I am both a horse-lover and deeply interested in the social history of the Great War. It was a good movie—but it could have been a really great movie. 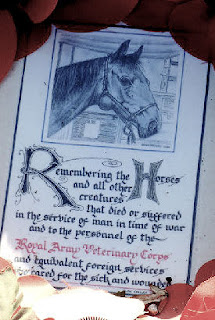 This is a photo I took at the Lochnagar Crater during one of my visits to the battlefields of the Western Front. As you know the crater is generally festooned with poppies and wreaths left by visitors. This wreath was dedicated to the horses and animals who gave their lives in the Great War and to the Royal Veterinary Corps who cared for them. That was another thing about the movie—a cameo appearance by members of the corps would have been nice. After all, if my memory serves me well, they were in the book. For those interested to read about a real equine hero of the war, I can recommend Warrior, by General Jack Seely. It has recently been published in a new edition, and tells the story of "The horse the Germans could not kill." It's a pretty amazing story about a brave—and morale-boosting—war horse. And though it means skipping over a war or two, there is always that true American war horse heroine, Reckless, whose courage under fire led to the mare being promoted to staff sergeant after the Korean War.

(Readers are probably aware that Jackie is the author of the best-selling series of WWI mysteries featuring that V.A.D. nurse turned sleuth, Maisie Dobbs.Learn more about Maisie HERE.)