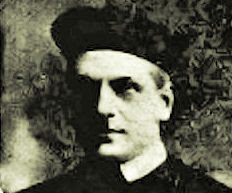 In the midst of the greatest naval battle of the Great War, Catholic chaplain Father A.C. Pollen (1860–1940) proved his courage. He was wounded at Jutland, mentioned in despatches, and awarded the Distinguished Service Cross for Gallantry in Action, the only chaplain to receive this decoration.

The worst cases we had sent down to us forward were of burns, due to a cordite fire breaking out in the starboard 6-inch battery.  Eleven cases, including Father Pollen, the RC Chaplain, were brought down suffering from very severe and extensive burns of the face, body and limbs. They were so badly burnt that one could do very little to relieve them or their pain and shock, injections of morphine seeming to have little, if any, effect on them. Father Pollen sustained his burns (face, hands and legs) through helping to rescue the men of the guns' crews who were on fire from the cordite.
Surgeon Gordon Ellis


Father Anthony had a great wit; when he reported to the captain of the Warspite, the captain said, "I hope we shall get on, but I think it fair to tell you that I don’t like Catholics," to which F. Anthony replied, "I am sure, Sir, that we shall get on, as, to be candid, I detest Protestants." They did become friends and played golf together during the short intervals at Scapa when they could get ashore.