Why Did You Enlist?
by Alan Seeger

In June 2016 we presented a 1914 report to the New York Sun by American French Foreign Legionnaire Alan Seeger HERE. Below is a selection from a longer article he wrote in May of 1915 for the progressive magazine New Republic, which would later champion America's joining the war. 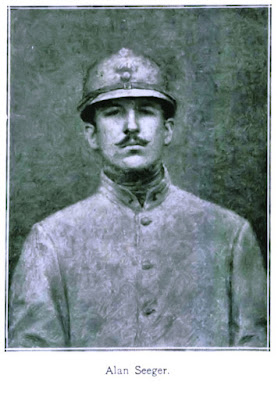 I have talked with so many of the young volunteers here. Their case is little known, even by the French, yet altogether interesting and appealing. They are foreigners on whom the outbreak of war laid no formal compulsion. But they had stood on the butte in springtime perhaps, as Julian and Louise stood, and looked out; over the myriad twinkling lights of the beautiful city. Paris—mystic, maternal, personified, to whom they owed the happiest moments of their lives—Paris was in peril. Were they not under a moral obligation, no less binding than their comrades were bound legally, to put their breasts between her and destruction? Without renouncing their nationality they had yet chosen, to make their homes here beyond any other city in the world. Did not the benefits and blessings they had received point them a duty that heart and conscience could not deny?

"Why did you enlist?" In every case the answer was the same. That memorable day in August came. Suddenly the old haunts were desolate, the boom companions had gone. It was unthinkable to leave the danger to them and accept only the pleasures oneself, to go on enjoying the sweet things of life in defense of which they were perhaps even then shedding their blood in the north. Some day they would return, and with honor—not all, but some. The old order of things would have irrevocably vanished. There would be a new comradeship whose bond would be the common danger run, the common sufferings borne, the common glory shared. "And where have you been all the time, and what have you been doing?" The very question would be a reproach, though none were intended. How could they endure it?

Face to face with a situation like that a man becomes reconciled, justifies easily the part he is playing, and comes to understand, in a universe where logic counts for so little and sentiment and the impulses of the heart for so much, the inevitableness and naturalness of war. Suddenly the world is up in arms. All mankind takes sides. The same faith that made him surrender himself to the impulses of normal living and of love forces him now to make himself the instrument through which a greater force works out its inscrutable ends through the impulses of terror and repulsion. And with no less a sense of moving in harmony with a universe where masses are in continual conflict and new combinations are engendered out of eternal collisions, he shoulders arms and marches forth with haste.

If no more serious argument can be brought against war than those inconveniences and sacrifices resulting to a man from his break with merely comfortable living, I confess I cannot see the contention of the pacifist, nor am I able to understand how war can be any more reasonably objected to than parturition, for example. That too, is painful; only, being a phenomenon of common occurrence and one to which no alternative has ever been imagined even by the visionary, its inevitableness is universally accepted. It would be Well if war were equally so—the supreme demand that nature makes upon the male, as the other is the supreme demand made up on the female. Wars are the birth-pangs of new era? And he who, ready to assume the burden and share the anguish, makes himself the instrument through which this vast power operates, is playing the largest part a man can play. Though he perish while the sweetness of youth is still in him and his capacities for earthly happiness are still unexhausted, I imagine that he does so with infinitely more assurance than any hypothetical reward of a supernatural religion can afford its votary. For his comfort is the sense of his life's blood flowing close to the heart of that cosmic entity of which he feels himself a fraction, and in whose movements it is his measure of his life's success to play the most essential, the most intimate part.

This view of war in its sublimity is one that will not easily occur to the distant spectator. It takes long nights at the outposts, nights such as the last we have been spending half way up the hillside to the enemy's trenches, when the cannon thundered all along the line down toward Rheims, and, mounting toward the meteors that fell out of the morning skies, the slow-curving rockets marked the course of the battlefront across the vast, misty lowlands and into the starlit distances. Not the sense of the bestiality and inutility of it all, but rather of its entire harmoniousness in a universe properly understood is the emotion that possesses the spectator of such a scene. The easy-going pacifist will continue to talk of the horrors of militarism and the clock of civilization being set back a hundred years. This is because he is unable to conceive of evolution except as an orderly progress toward the realization of some arbitrary ideal based upon considerations of individual human well being. The philosophic mind, on the other hand, does not think of evolution in terms of anything so relative as the principles of human morality at all, but rather as an increasing complexity of phenomena—of the possibilities for happiness as well as of all else—-a process which works out through destructive influences quite as much as through inventive and creative.