This map illustrates where the battle lines stood on 1 August 1916, exactly two years into the war and after the launching of the Verdun, Somme, and Brusilov offenses but before their conclusions.  Only the European theaters are shown.

Russia fared poorly, losing control of territory in what is now Poland, Ukraine, and the Baltics, while Serbia had been overrun. Fighting on the Western Front and in Italy had accomplished essentially nothing beyond what the Germans had managed to achieve before the Battle of the Marne.  The tiny blue line near Salonika in Greece represents a small Allied force that had seized the city to try to maintain a token force in the Balkans. Their presence embroiled Greek politics in crisis but had little military significance until the Central Powers were on their last legs.

The map was presented in the February 2016 issue of Carrying the Torch from the Friends of the Canadian War Museum.  The original source was not cited. 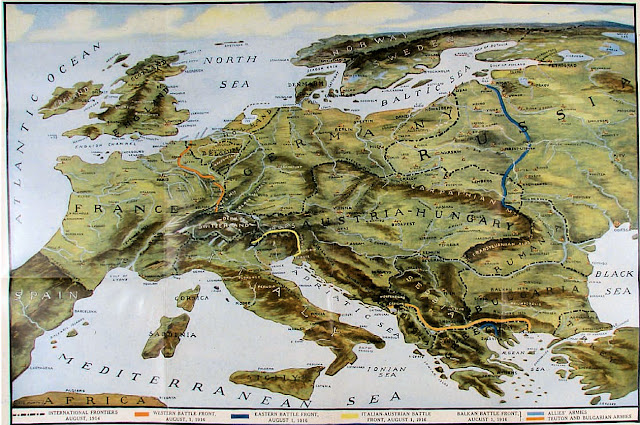