The Italian source also reported that Tinkham’s father Julian was with him when he died and arranged the burial.


After Edward’s death, Julian Tinkham sold his business interests and devoted himself wholeheartedly to promoting the League of Nations and the cause of peace. A diehard, he campaigned tirelessly for the U.S. to reconsider and join the League, frequently contributing what today we call op-ed pieces to the New York newspapers. He moved to his farm (another story) and turned his house at 509 Park St. in Montclair, NJ, into a venue for meetings and lectures. He redeveloped his 1.7 acres of grounds, and from 1924 to 1926 he opened them to the public as a "Peace Garden", where visitors could “enjoy tea in his garden amidst fountains and lily ponds with goldfish and other attractive features.” There were protests from the neighbors, lawsuits, and a city zoning violation action, which ultimately closed the place down. One of the fountains was "The Model for the League of Nations" by the noted Philadelphia sculptor A. Sterling Calder. After Julian’s death in 1940, this work was moved to Mountainside Hospital in Glen Ridge, NJ. In recent years the house was the residence of economist Paul Volcker, Federal Reserve Chairman from 1979 to 1987.

In addition to his Naval Air Service, Edward Tinkham was one of 19 men from the old AFS TMU 526 who died in the service. A total of 149 men who served with the AFS Camions were lost. See the earlier accounts of his remarkable service in the Great War at these Roads to the Great War postings: 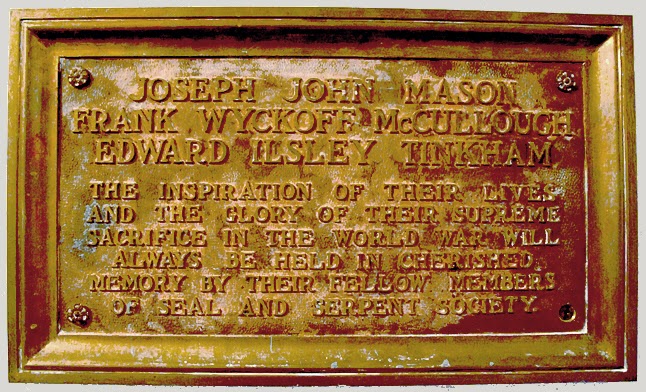