Recommended:  The Strawfoot of Keith Muchowski


Another blogger I'd like to recommend to you is Keith Muchowski, who is the proprietor of The Strawfoot. Keith meets the "Eye Test" — he has a great eye for interesting topics and terrific images, and the "Won Ton Soup Test" — he serves you lots of won tons in your bowl.

He his given us permission to present one of his entries here in its entirety, but please visit The Strawfoot yourself, go through the archives, and subscribe for new material at: 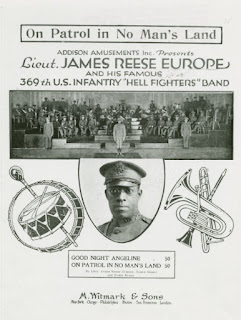 
Yesterday was the anniversary of the death of James Reese Europe, the bandleader of the 369th Harlem Hellfighters. His death is an unpleasant story: after surviving the horrors of the Great War he was stabbed backstage in the dressing room at a show in Boston by the drummer in his band. I have always suspected that post-traumatic stress disorder played a role in the incident. I am involved in a project regarding Europe and the 369th which, if it comes to fruition, I will discuss here on the blog. Until then, I won’t say too much. Europe’s premature death in May 1919 meant that he was not to be a fixture in the Twenties jazz scene. He very much would have been the equal of Sidney Bechet, King Oliver, and even Louis Armstrong.


Reese's grandson, great-grandson, and other descendants were on hand at the Lusitania commemoration last Thursday here in New York. I spoke to them during the reception and can attest that they inherited the charisma and magnetism for which James Europe himself was known. Great grandson Rob is today a bluesman and provided the entertainment at the reception.