Admittedly, since Bonaparte fought all over Europe and the Mideast, it shouldn't be surprising that visitors to the Great War's battlefields might stumble across reminders of the Emperor's martial industriousness. Here's one such site from the Italian Front that's beautiful to behold — the Napoleon Bridge at the Caporetto battlefield. 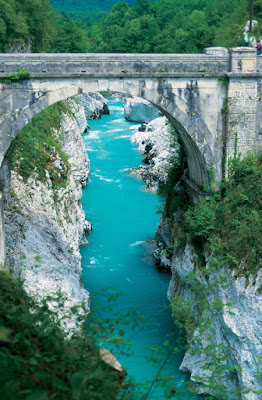 Both Soča  (formerly the Isonzo) banks below Kobarid (formerly Caporetto) were already linked in the past by a bridge. The old bridge was constructed in and received its name when Napoleon’s troops marched across it. On 24 May 1915, the first day after Italy had declared war, retreating Austrian soldiers blew up the bridge. Afterward, the Italians initially built a wooden bridge, later replacing it with an iron one. The temporary bridge was blown up by the retreating Italian 2nd Army during the Battle of Caporetto. 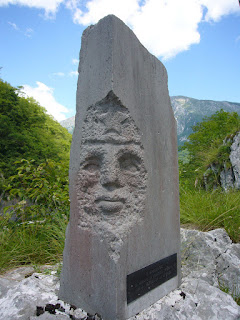 The current bridge was built after the Great War by the Italian government. In the Second World War, the Partisans defended the liberated territory of the Kobarid Republic near the bridge. The WWII marker (above), being something of a reminder of Slovenia's communist past, is not emphasized in tourism handouts today. In memory of these events there are two memorials for each World War near the bridge.