On 19 May 1915 more than 40,000 Ottoman troops attacked the Anzac perimeter, determined to drive the invaders back into the sea. At The Nek, Arab and Turkish infantry made repeated attempts to breach the Anzac defences, each attack collapsing in the face of accurate machine gun and rifle fire. An estimated 3000 Ottoman soldiers died during the failed attack, and their bodies were left to rot in No-Man’s-Land alongside Anzac dead from earlier battles. The fouled state of the line became too much to endure, and both sides agreed to a 24-hour truce on 24 May 1915 to bury the dead. 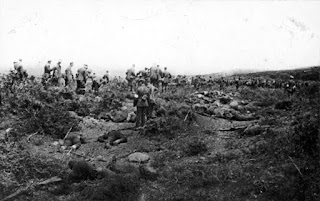 In front of the New Zealand Mounted Rifles’ position at The Nek,


… just over the parapet a few yards back along the beach, there were five of our boys all dead from the first Tuesday [27 April], a Lieutenant, 3 privates, and a bugler; the smell, during the broiling days from the bodies, was awful and I had to throw disinfectant over them three or four times a day. We couldn’t get out to bury them and they were partly covered by the earth thrown up in making the trench. It was quite sufficient to show one’s hand as one threw over the disinfectant, to draw fire from the Turks. They were all lying on their stomachs facing the enemy and the poor little bugler’s bugle was riddled with bullets where it was slung on his back, each bullet having passed through him. He lay there with his entrenching tool still poised in the air to make a blow towards digging himself in but his head had fallen forward. They all five had their hats on and it was a pitiable sight to see such a sight through the mirrors of a periscope. What a picture for an artist…