False Legend: The 66-lb. Pack at the Somme

All great events generate legends that magnify or distort the actual proceedings, and that is certainly true of the Battle of the Somme.  One of these involves the shoulder pack the British infantryman had to carry into battle as he went over the top and across no-man's-land.

Many sources, including the British Official History, suggest that soldiers who attacked on 1 July 1916 carried a pack weighing over 66 lbs (30kg).  Contemporary records, film, and photographs show that this was not the case. 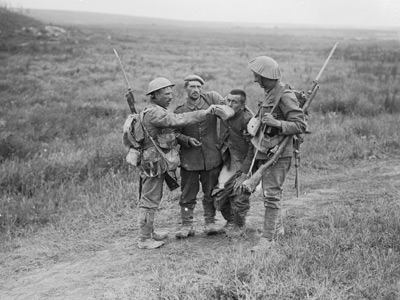 Above, British infantrymen give a helping hand to wounded German prisoners near la Boisselle on 3 July 1916.  They are both wearing their equipment in "fighting order."  One has an additional bandoleer of ammunition, and each has an anti-gas PH (phenate hexamine) helmet in a small bag hung at the front.

If the weight carried by the soldiers affected their progress across no man’s land the men of 36th Ulster Division would not have been able to rush the Schwaben Redoubt, and General Congreve’s XIII Corps, which achieved considerable success in the southern part of the line, would surely have been hampered as much as the soldiers in the unsuccessful attacks further north.