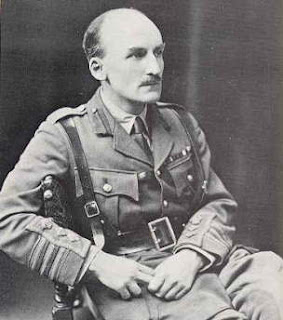 Just before he retired from the British Army Major General J.F.C. Fuller, brilliant historian and military theorist, fascist sympathizer, and all-around insufferable Odd Duck, published a reflection based in good part on his experiences and observations in the Great War.  It was titled:  Generalship: Its Diseases and Their Cure. Naturally it was not well received by the high command of that period. Some say it was suppressed.

Here are some of Fuller's points that still seem to ring true.

1. In France, as in Gallipoli, and from all accounts in every theater of the World War, a blight fell upon generalship.

2.  Passchendaele [as an example. . .] though no one in his senses would have expected the general-in-chief, or his subordinate army commanders, to lead their men over those desolated shell-blasted swamps, very little was done outside formulating a plan to fight an offensive battle in a most difficult defensive area, with the result that soon after this battle was launched, on 31 July 1917, all contact between the half-drowned front and the wholly dry rear was lost. This hideous turmoil will go down in history as the most soulless battle fought in the annals of the British Army.

3.  Sometime before the outbreak of the World War, the art of soldiership slipped into a groove and became materialized . . .the more management or command became methodized, the more dehumanized each grew.

4.  By 1914 [the generals] saw [the troops] no longer; now and again, perhaps, he heard of them far away, as managing directors sitting in dug-outs, in chateaux, and in offices.

5.  Where the German [General Staff] system went wrong was that it superimposed a committee of irresponsible non-fighting officers on the general. . .the object was not to liberate the general from non-fighting detail and so allow him to develop his personality and exercise it; but to restrain or stimulate his personality and so establish a uniformity of doctrine and action.

6.  In war it is almost impossible to exaggerate the evil effects of age upon generalship, and through generalship, on the spirit of an army. . .First, war is obviously a young man’s occupation; secondly, the older a man grows the more cautious he becomes, and thirdly, the more fixed his ideas. . .Youth, in every way, is not only more elastic than old age, but less cautious and far more energetic.

7.  In war, as in peace, individuality is far more important than uniformity; personality than congruity, and originality than conventionality. . .The old are often suspicious of the young and do not welcome criticism, yet without criticism both destructive and constructive, there can be no progress.

8.  I maintain that the proper place for a general is with his men, sharing their discomforts and dangers. . .

10.  These then are the three pillars of generalship: courage, creative intelligence, and physical fitness; the attributes of youth rather than of middle age.