How Greece Views the Great War

In 1918, even though the Macedonian Front occupied more than 1,000,000 men on its battleﬁelds, its memory in Greece and Bulgaria today is in no way similar to the one of the Western or the Eastern Front held by the nations that also fought there.

For Bulgarians the First World War was a national disaster, and so was the deﬁnitive loss of Macedonia. In the case of Greece, the situation was diﬀerent. The loss of Asia Minor (Turkish War) is for the Greeks what the loss of Macedonia is for the Bulgarians. The First World War was not the most important war. For most Greeks it was rather a break, an interlude between national wars (1912–1913 and 1919–1922). That is why it was recorded in the literature and in the collective memory not as the Great War but as the period of the National Discord, which has caused several problems to the political life in Greece for decades and is considered by many researchers the main cause of the in Asia Minor Disaster (1922).

For the Greeks the First World War is the least known war of the 20th century. It is the National Discord war caused by Prime Minister Venizelos’ insistence that Greece enter the war pairing with the Entente, as well as by King Constantine’s insistence that Greece remain neutral and thus favored by Germany. Eventually, Greece itself was divided in two states with two capitals, Thessaloniki and Athens. In fact, the Greek army, which had won in the Balkan Wars, pledged allegiance to Constantine, but when Venizelos prevailed with the Ententes’ help in 1917 most of the officers and the soldiers were discharged. Another army took its place with soldiers who came mostly from the New Greece (Epirus, Macedonia, Crete, Aegean Islands, and Thrace). The generals who were supporters of the king were persecuted. When Constantine was restored to the Greek throne, the supporters of Venizelos were persecuted, while the supporters of the king were restored to the army with all glory and honor. 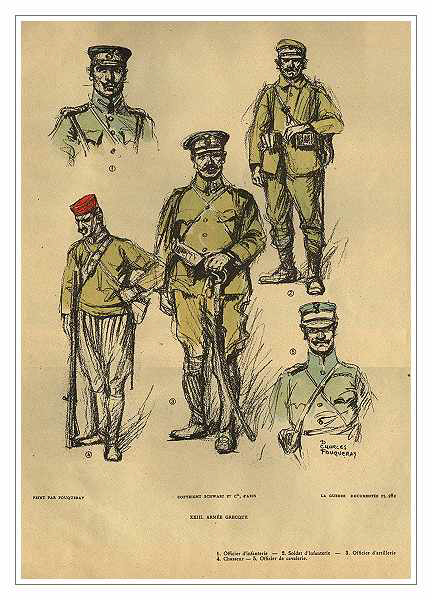 Consequently, when monarchy was re-stabilized (1935) in Greece, the Balkan Wars period, during which Constantine was praised as commander-in-chief of the Army, came to the fore, while the First World War period was hushed up because it was associated with his failed political practices. Until 1974 the First World War and the Macedonian Front remained in the dark, as part of a political suppression of the responsibilities of monarchy itself.

The fighting involving Greece that Westerners associate with the First World War — The Macedonian Front — is honored only by the Entente’s veteran association on the last weekend of September with festivities in the Allied cemeteries in Stavroupolis, Thessaloniki, in the Axioupolis monument and in Doiran Commonwealth and Greek cemeteries, and on 11 November, the day of the Armistice, at the central Entente cemetery in Stavroupolis, Thessaloniki, and in the presence of very few dignitaries and common people.

From: The Great War and the Balkans: the Use of Memory in Bulgaria and Greece by Vlasis Vlasidis, University of Macedonia.