100 Years Ago: Setting Sail for the Battle of Jutland

Tomorrow, it will be 100 years since the Battle of Jutland. This was the only major fleet vs. fleet naval battle of the First World War and took place between the German High Seas Fleet and the British Grand Fleet. Over 6,000 British and 2,500 German sailors lost their lives in the fighting.

In 1914 Britain had the biggest and strongest navy in the world. Admiral Alfred von Tirpitz (1849–1930) greatly expanded the size and quality of the Imperial German Navy, until the German Navy grew to become one of the greatest maritime forces in the world, second only to the British Royal Navy.

After the British success at Dogger Bank in holding back the German attack in January 1915, the German Imperial Navy chose not to confront the numerically superior British Royal Navy in a major battle for more than a year, preferring to rely on its lethal U-boat fleet. However, in May 1916, with the majority of the British Grand Fleet anchored far away at Scapa Flow, Vice Admiral Reinhard Scheer believed the time was right to resume attacks on the British coastline. Scheer ordered 19 U-boats to position themselves for a raid on the northeast coastal town of Sunderland, using air reconnaissance craft to keep an eye on the British fleet. Bad weather hampered the airships, however, and Scheer called off the raid, instead ordering his fleet to head north, to the Skagerrak, a waterway located between Norway and Denmark off the Jutland Peninsula, where they could attack the Allied naval interests and, with luck, punch a hole in the stringent British blockade. 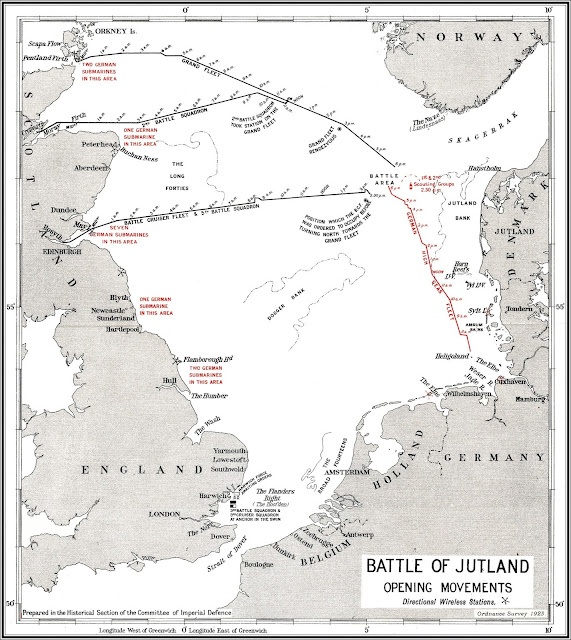 Unbeknownst to Scheer, however, a newly created intelligence unit in Britain had cracked the German communication codes and warned the British Grand Fleet’s commander, Admiral John Rushworth Jellicoe, of Scheer’s intentions. Consequently, on the night of 30 May, a British fleet of 28 battleships, nine battle cruisers, 34 light cruisers and 80 destroyers set out from Scapa Flow, bound for positions off the Skagerrak.

On 31 May, a British naval force commanded by Vice Admiral David Beatty spotted a German squadron of warships and confronted them some 75 miles off the Danish coast. The two squadrons opened fire on each other simultaneously. This lasted around 55 minutes, during which time two British battle cruisers (HMS Indefatigable and HMS Queen Mary) were destroyed with the loss of 2,000 sailors. The remainder of the German fleet then joined, so Beatty was forced to fight a delaying action for the next hour, until Jellicoe arrived with the rest of the Grand Fleet. Both fleets faced off in their entirety, and a great battle of naval strategy commenced. As sections of the two fleets continued to engage each other throughout the late evening and the early morning of 1 June, Jellicoe maneuvered 96 of the British ships into a V-shape surrounding 59 German ships. The German flagship, Lutzow, was disabled by 24 direct hits but was able, before it sank, to sink the British cruiser Invincible.

The German fleet withdrew under cover of darkness at 18:30 on 1 June, thus ending the battle, and cheating the British of the major naval success they had envisioned. The Battle of Jutland engaged a total of 100,000 men aboard 251 ships over the course of 72 hours. The Germans claimed it as a victory for their High Seas Fleet. At first the British press agreed, but it was not so clear-cut. The German navy lost 11 ships, including a pre-Dreadnought battleship and a battle cruiser, and suffered 2,500 casualties; the British sustained heavier losses, with 14 ships sunk, including three battlecruisers, and 6,000 casualties.

On 4 July, Vice Admiral Scheer advised the German high command that further fleet action was not an option and that submarine warfare was Germany’s best hope for victory at sea. This strategy when implemented fully would bring the United States into the war. Despite the heavy losses, the Battle of Jutland had left British naval superiority on the North Sea intact.