Two Classics of the Soldier's Experience: Under Fire & Storm of Steel,
reviewed by Jolie Velazquez 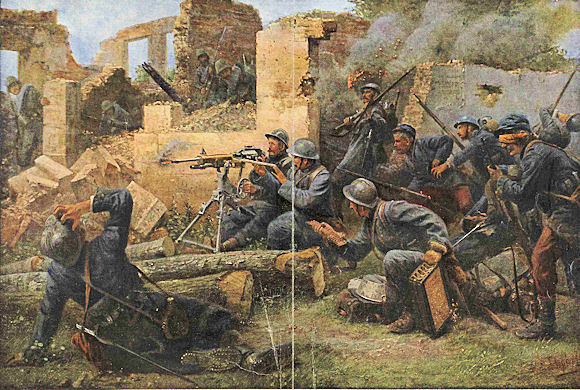 These books are the first and second books by actual soldiers of The Great War to become best sellers in Europe, and then in English-speaking countries when they were rapidly translated. They are like bookends of the warrior's experience. One is a tale of the helpless terror of combat, and the other an almost journalistic tale of men doing a dirty job no worse than any other unpleasant occupation, such as cleaning sewers. Read together, these two stories cover the soldier's experience from both ends of the spectrum.

Henri Barbusse entered the French army at the beginning of the war, serving as a stretcher-bearer in a frontline unit until invalided out by a serious injury. His narrator sees the war though the eyes of a non-combatant, as Barbusse was-never having to end a human life himself, and all that more vulnerable for not carrying a weapon. We know now what the common soldiers learned for themselves in the trenches: that for the first time in history artillery was going to create a battlefield were there were no safe places. Nonetheless, bearing a weapon must have given a man at least a shred of autonomy that an orderly did not possess.


Under Fire is a novel, but also the author's own thinly disguised story of one squad carrying out their orders, living as best they can in filthy, dangerous conditions, eating when they can, resting where they can, and hanging on to their sense of humanity by caring about and for each other, or not, as the case may be. Barbusse lets the Poilus complain, insult one another ,and tell stories in their own vernacular. He has a gift for describing the surreal waking dreams of an individual trapped by ceaseless war, sometimes drifting into poetry. As the first uncensored story to reach a wide audience, Under Fire also set the standard tone for many memoirs to follow. The insanity of the first modern war and its capacity for destruction left many soldiers with a politically pacifist view, as they dealt with the aftermath of experiences that left them broken mentally as well as physically. Barbusse himself was a socialist who became ever more dedicated to the cause, living for a time in the Soviet Union and continuing to write in support of ending capitalism and war. Ernst Jünger's straightforward memoir illustrates an entirely different attitude about combat. Storm of Steel is the alternate narrative of the Great War, one resolute and patriotic, though not chauvinistic. The author joined the army on the day war was declared and was among the first trainees to fight in France. He tells a clear, sometimes stark story of his squad as it takes part in offensives, defends its section of occupation, or waits for combat to begin again. He was not unfeeling, but he did not allow death, injury, or primitive conditions to divert him from the goal of winning the war as soon as possible. He was a model soldier in the Junker tradition. This translation reveals the author's own facile ability with language, sometimes reporting on events as if for court evidence, but many times coloring his descriptions with vivid phrases that draw the reader in. We also get unique details, such as the time he and his squad found themselves lost in the French trenches because sappers accidentally connected to them while repairing a damaged section of their own.


The book was highly admired by soldiers and critics,and became especially important to those who later went on to fight in World War Two for Germany, though Jünger himself disavowed any affiliation with the Nazi Party. Soured by the Weimar political era, but highly intellectual, he could express opinions conservative or liberal, depending on which topic was covered. Jünger lived into the late 1990s as a well-known author without allowing himself to be co-opted by any ideological group, often tarred by his unwelcome appeal to Fascists, but openly critical of the materialism and technology that was eroding individualism.

Personal note by editor David Beer: Taken together, these two books form an excellent introduction for a reader who wants to learn something about the Great War without delving into detailed political or historical accounts. Both books show intense military and humanistic aspects of the war and, possibly with the addition of All Quiet on the Western Front, would make an effective "beginner's course."

Then I'd be tempted to follow on by assigning The Guns of August and Testament of Youth. If time permitted, I'd add Goodbye to All That and Undertones of War. Oh! What a Lovely Class . . .