Centennial Pilgrimage: A Visit to the Lafayette Escadrille's Airfield for the Battle of Verdun


The American volunteers serving in the Lafayette Escadrille first caught the world's and America's attention during their four months service in the Battle of Verdun.

After an initial month of service at Luxeuil near the Swiss border, the new squadron was transferred into the Verdun sector to the Behonne Aerodrome near the village of Bar-le-Duc, about 25 miles southwest of Verdun. Furnished with some excellent reconnaissance photos from author Steve Ruffin, I decided to include a visit to the Behonne Aerodrome – still an open farm field – with some original buildings still existing as part of my recent 1916–2016 Verdun In-Depth battlefield tour I was leading on behalf of Valor Tours, Ltd.  I look back to the visit now as a pilgrimage. We made our visit in May, precisely 100 years after the squadron arrived at Behonne. 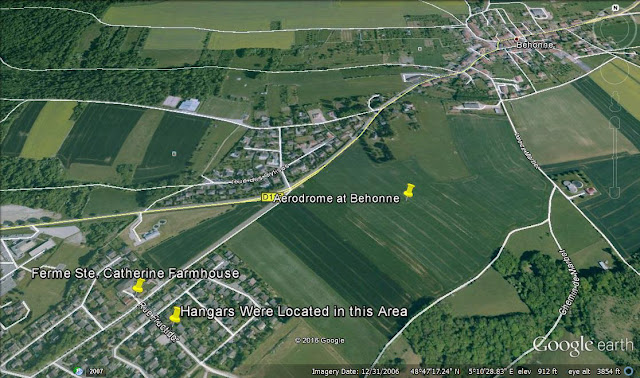 Some details about the service of the Lafayette Escadrille while they were stationed at Behonne:

During this period, during which Raoul Lufbery and several others joined the squadron, it was very active, flying 146 sorties from the Behonne Airfield. Bert Hall scored the squadron’s second victory and his first on 23 May, and he scored his second on 23 July. Lufbery shot down a two-seater on 31 July.

During this tour, Rockwell and Thaw were wounded, and on 23 June Victor Chapman was shot down over the Verdun sector after being attacked by three German fighters. By mid-September when it was reassigned to Luxeuil, the squadron could claim 13 victories.

For a week in July, the French Air Force pilot Lieutenant Charles Nungesser flew with the Lafayette Escadrille. Nungesser went on to become one of France’s great aces with 45 victories.


Thanks to Steve Ruffin and the New England Air Museum