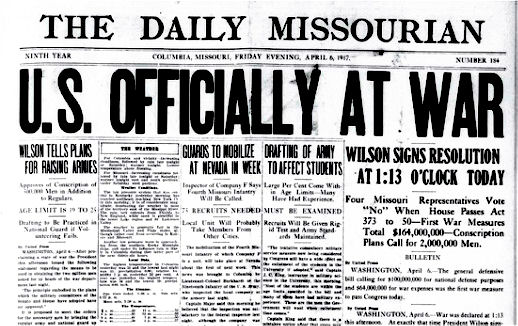 On 4 April the Senate held a daylong debate, then voted 82 to 6, with eight abstentions, for war. The House voted 373 to 50 on 6 April, Good Friday. The joint war resolution was rushed to the White House; Woodrow Wilson interrupted his lunch and came to the office of the usher, Ike Hoover. "Stand by me, Edith," he said to his wife. She handed him a gold fountain pen, a gift he had given her, to sign the document.

Immediately afterward, a signal was passed to a junior naval officer, who  had been instructed by Assistant Secretary Franklin Delano Roosevelt to stand in readiness. Now the young man rushed outside and with his arms semaphored to a figure standing in a window of the adjacent State, War and Navy building, who then ordered that wireless messages be sent to all the ships at sea: the United States of America was at war.

This is the document the president had just signed.

CHAMP CLARK
Speaker of the House of Representatives