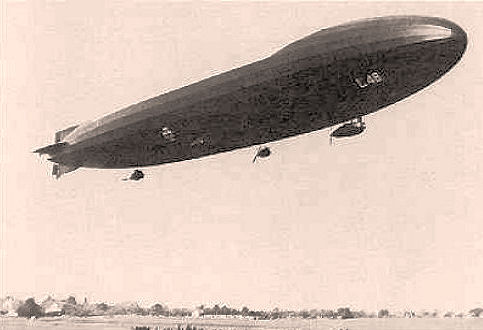 The Ancient House Museum in Norfolk has on display an unusual object in the form of an aluminum frame. It came from a German zeppelin, the L-48, belonging to the German Navy, which took part in an attempted air raid on London on the night of 16 June 1917.

The L-48 was a new "Height Climber" zeppelin, stripped of excess weight, and containing 55,800 cubic meters of flammable hydrogen gas with a length of 196.5m. It could travel at 60 mph and fly as high as 20,000 feet, much farther than British anti-aircraft guns and fighter planes could reach. Tactically the zeppelin would fly at lower levels, using faster winds to approach its target, and then ascend to safer heights before dropping its 6,000 pound bomb load. The zeppelin had 19 crew, based mainly in two gondolas attached to the bottom of the airship. Some crew could also be sited on machine gun platforms on the top of the airship and others in passages inside the structure of the airship itself.

The very first fatal zeppelin air raid on Britain had taken place over Norfolk in January 1915, causing damage to Great Yarmouth and King’s Lynn and resulting in four dead. Since then, British defenses had improved, with the introduction of searchlights and antiaircraft artillery. The invention of the incendiary bullet in 1916 meant that zeppelins were now much easier to shoot down, if they came within range of fighter aircraft.

On the night of 16 June 1917, the L-48 was one of four airships sent to attack London. After dropping bombs on Harwich, the airship tried to return home by heading east. However its compass had frozen at the high altitude and, unknown to its crew, it drifted north in the dark along the Suffolk coast. The airship was caught in searchlights and antiaircraft guns opened up, although the zeppelin was too high to be harmed by these.

Several aircraft took off to attack the airship, but, although firing at the zeppelin, the planes could not gain the altitude to inflict any damage. In an effort to escape British airspace before dawn, the zeppelin captain gave orders to descend to reach more favorable winds. Captain RHMS Saundby, in his aircraft, noticed the descent beginning and attacked again. His bullets hit the zeppelin this time, the tail of the airship ignited, and the huge airship began to fall to earth, lighting up the sky as it did so. The vast structure crashed into the ground at Holly Tree Farm in Therberton, near Leiston, Suffolk.

Three of the German crew managed to jump out of their gondola as it hit the ground and then watched in horror as the flames consumed the entire zeppelin, as well as their 16 fellow crew members.

In the next days crowds of locals came to view the wrecked zeppelin, and a local photographer arrived to take pictures of the airship.  The entire structure was dismantled by the Army and removed for military study. The piece of aluminium frame on display in the Ancient House is one of only two surviving significant parts of the zeppelin now known to exist, the other being in Theberton Church.