Col Hiram I. Bearss, had the most varied career of any officer of the AEF. As a temporary colonel he arrived in command of the Base Detachment of the 5th Marines. He had already been approved for a Medal of Honor for services in the Philippines in 1901, which was awarded in 1934. With duty at St. Nazaire he was also made CO of the base, including several U.S. Army labor companies. When Col Doyen assumed command of the newly created 2nd Division, Bearss commanded the 5th Regiment of Marines, then the 4th Brigade. "Hiking Hiram," as he was known, was relieved in February 1918 when Wendell Neville arrived to command the 5th  and Doyen returned to the brigade. 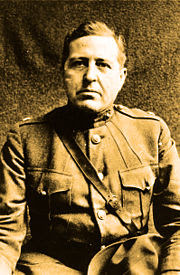 Bearss was placed in command of the 3d Bn, 9th Infantry of the 2nd Division, especially to train this polyglot unit composed of mainly recent immigrants. He did a fine job and later became CO of the 9th Infantry at Toul. He was assigned to duty with the 2nd Division and then to the 6th Marines as assistant to the regimental commander. Because he was over in grade he eventually was transferred as CO of the 102nd Infantry, 26th Division.

He led them admirably at St. Mihiel, where the 26th Division helped close the salient, and later at Marchville where he earned a DSC.“His indomitable courage and leadership led to the complete success of the attack by two battalions of his regiment at Marcheville and Raiville. During the attacks these two towns changed hands four times, finally remaining in our possession when the enemy withdrew. Under terrific machine gun and artillery fire he was the first to enter Marcheville, where he directed operations. Later, upon finding his party completely surrounded, he personally assisted in fighting the enemy off with pistol and hand grenades.”  Later,  he assumed command of the 51st Brigade, 26th Division.

Retiring as a brigadier general, he was also the recipient of the Army & Navy Distinguished Service Medal; Legion of Honor (officer); CdG, Palm and a CdG, Silver; and the Belgian Croix de Guerre. A Fletcher-class destroyer, commissioned in 1944, was named after him

Bearss died 28 August 1938, in an automobile collision in Columbia City, Indiana, while en route from Chicago to Peru, Indiana. He was buried at Peru in Mount Hope Cemetery