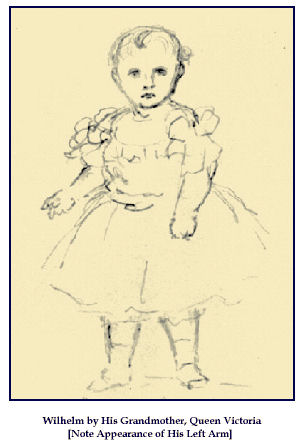 On 27 January 1859, the first child of the Prussian Crown Prince Friedrich and his wife Victoria was born in Berlin. One of the doctors present noted that the royal baby was born "seemingly dead" after long and painful hours of labor endured by his (then only 18-year-old) mother. It was a complicated and unexpected breech birth, and for the attendant physicians, both English and German, the struggle to save the baby's life was made more difficult by the fact that royal etiquette forced them to work under the long skirts of the princess. The young mother had been heavily sedated with chloroform, a recent medical discovery whose risks were yet unknown. It was an invention that Queen Victoria had found to be so useful herself that she had personally ensured her eldest daughter Vicky received it for her first labor.

Only later did it become apparent to the proud mother and those close to her that all was not well with the newborn. The forceful intervention of the physicians had caused injury to the prince's neck and had severed some nerves leading to the left arm, leaving him permanently disabled, although the full extent of the damage was not apparent at the time and would be revealed only gradually. 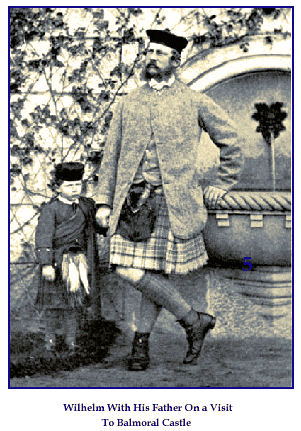 Despite the many cruel and imaginative ways the best doctors of the time attempted to cure the unhappy child's disability—with the application of electric currents, with so-called "animal baths" in which a freshly slaughtered hare was wrapped around the lifeless arm, by strapping the "good" arm to the boy's body, thus forcing him to attempt to use the useless one—the child that was destined to rule the most powerful military state of the late 19th century was unable even to get dressed by himself or cut up his own food. His mother was barely able to conceal her disappointment in her child, and the son, aware of the rejection, developed a strained love-hate relationship with his mother. Later in his life, these ambivalent feelings toward his English-born mother turned into a similarly strained relationship with England—with disastrous consequences.

Why should the birth of a baby—albeit a royal one—attract the attention of historians? There is the obvious reason that the child in question was predestined to become Prussian King and German Kaiser. The Prince, named Wilhelm, like his grandfather, who was King of Prussia and would become German Emperor in 1871, was to rule Germany for 30 years, from 1888 until his abdication and flight to the Netherlands in November 1918.

The baby who had suffered such a traumatic start grew up to be a troubled, hyperactive, and difficult child and later a disturbed, cruel, and sometimes even dangerous man. For some commentators the reasons for this lie not only in the horrific "cures" for his physical disability, his harsh upbringing with an exaggerated emphasis on discipline and Prussian-style militarism, and the strained relationship with his mother, but also to some extent in the traumatic events surrounding the birth itself. Specifically, side effects from the use of chloroform, together with prolonged oxygen starvation in the child, have led to speculations about possible brain damage, although it is impossible to prove such a thesis beyond doubt.