Probably most of readers have heard of the Willy-Nicky (Kaiser-Tsar) telegrams exchanged at the start of the war, but might not know the matching set at the end of the war between Generals Foch and Hindenburg to set up the Armistice negotiations.  They're rather proforma, lacking entirely the intimacy of the Imperial cousins in the earlier set. They do, however, have an certain tone about them. Hindenburg in the opening document indicates he has been in communication with President Wilson but is apparently not aware there would not be American representation at the meeting. The German Government, having been informed through the President of the United States that Marshal Foch had received powers to receive accredited representatives of the German Government and communicate to them conditions of an armistice, the following plenipotentiaries have been named by it:

The plenipotentiaries request that they be informed by wireless of the place where they can meet Marshal Foch.  They will proceed by automobile, with subordinates of the staff, to the place thus appointed. 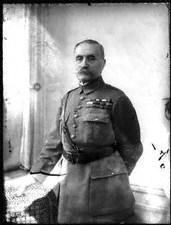 To the German Commander-in-Chief:

If the German plenipotentiaries desire to meet Marshal Foch and ask him for an armistice, they will present themselves to the French outposts by the Chimay-Fourmies-La Capelle-Guise road.

Orders have been given to receive them and conduct them to the spot fixed for the meeting.

The German plenipotentiaries for an armistice leave Spa today.  They will leave here at noon and reach at 5 o'clock this afternoon the French outposts by the Chimay-Fourmies-La Capelle-Guise road.

They will be ten persons in all, headed by Secretary of State Erzberger.

From the German outposts to the French outposts our delegation will be accompanied by a road-mending company to enable automobiles to pass the La Capelle road, which has been destroyed.

By reason of delay the German delegation will not be able to cross the outpost line until between 8 and 10 o'clock tonight at Haudroy, two kilometres northeast of La Capelle.