From the beginning of the 16th-century
through the middle of the 17th, Russia on
average annually added territory equivalent to
the size of the Netherlands, and it continued
expanding until World War I. No other state in
world history has expanded so persistently.
Richard Pipes

Looking at a pre-WWI map of the world, one cannot help but be impressed by the sheer vastness of Russia by 1914. Russia grew as a multinational and multicultural empire along with the Western European empires, but there was an important difference between them—the colonies of the Western European empires (those of Great Britain, France, Holland, Portugal, and Spain) were overseas, physically separated from their capitals. Russia, however, was a continental empire without a clear differentiation between the ruling core and its colonies, more like the Ottoman Empire. Although the Western European states developed national identities separate from their colonial possessions, Russia did not. Many historians have argued that Russia never was a nation-state but developed as an empire from the beginning. Its need for expansion was self-perpetuating—it was constantly conquering or acquiring territory populated by non-Russian ethnic and nationalist groups.

The Muscovite principality marked the geographic center of the territory settled by ethnic Russians in
medieval times, and the Muscovite court formed an efficient capital with a monolithic, militarized political organization. Neighboring political-military groupings were comparatively weak and vulnerable to invasion. However, these acquisitions formed a belt of regions of dubious political loyalty, arousing permanent insecurity in the core state, which responded with repression and further expansion of boundaries to create buffer zones. Because the Russians' deeply ingrained sense of territorial security created the need for both large and expensive state bureaucracy and military, Russia's commerce, economic growth, and technological development consistently lagged behind those of its European neighbors.

Yet Russia's vast natural resources, large territory and population, and ability to mobilize a large army made the country a formidable player in European politics. After the defeat of Charles XII and Sweden at Poltava in 1709 and the relocation of the capital from Moscow to the newly built St. Petersburg on the Baltic Sea in 1713, Russia continued to expand in the Baltic region. Later in the century, under Catherine the Great, Russia expanded in the west through the three partitions of Poland (in 1772, 1793, and 1795) and to the south at the expense of the Ottoman Empire.

The Cossacks are an interesting aspect of Russian imperialism. They were originally refugees from the Turkic states of Central Asia, who preferred a nomadic life on the steppes to serfdom. Their cultural inclinations made them perfect for fighting along the rough borderlands. After a centuries-long process they were co-opted into Russian service, becoming the vanguards of expansion and the
protectors of the frontier.

In the 19th-century, expansion continued to the south into the Caucasus and to the southwest into Central Asia. Historians have argued that the geography of Eurasia was as conducive for the Russians as it had been for the Golden Horde and Tamerlane, enabling the creation of a huge continental empire. Professor Edward Keenan has suggested that the tsars were pragmatic opportunists—in other words Russia expanded because it could. 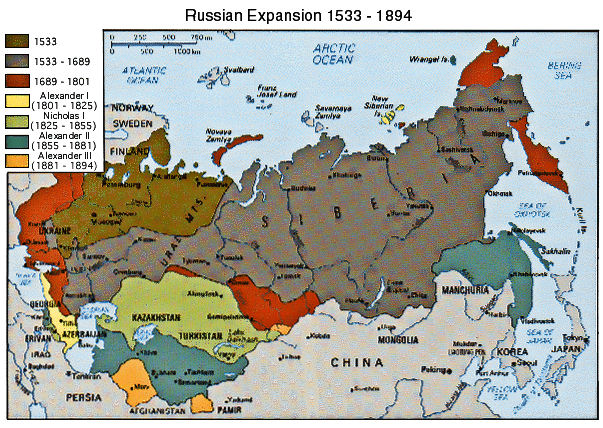 However, beginning with the Napoleonic Wars, Russia's imperial ambitions brought it into conflict with other nations and empires similarly ambitious or anxious about their declining fortunes. Throughout the 19th century, Russian rebuffs or defeats in Europe were repeatedly followed by greater attention and expansions to the east. For example, the defeat of Russia in the 1853–56 Crimean War at the hands of a coalition of France, Sardinia, the United Kingdom, and the Ottoman Empire was followed by extensive Russian conquests in the East. In the Caucasus, Russia had been fighting for decades, but pacification was nearly complete when in 1859 legendary Chechen leader Shamil was captured. In a series of successful military expeditions from 1865 to 1876 in Central Asia, Russia conquered the khanates of Kokand, Bokhara, and Khiva. The far eastern boundary of Russia had remained unchanged from the Treaty of Nerchinsk with China in 1689, but in 1858 China gave up the left bank of the Amur River to Russia through the Treaty of Aigun, and in the 1860 Treaty of Beijing, China ceded the Ussuri River region.  The reign of Alexander III saw expensive probes to the the south, threatening the British Raj, into Turkmenistan and Tajikistan. His son, Nicholas II, would suffer the humiliating loss of territory in the east in the war with Japan.