In the Doughboys' Own Words: Armistice Day 1918 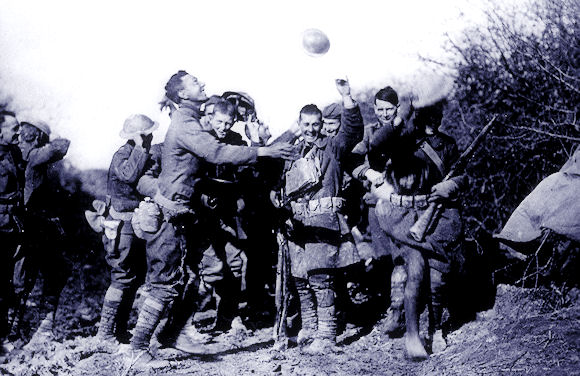 From In Their Own Words at the Doughboy Center


. . . The night of November 8 was indeed a wild one. It was on this night that the first report, or rather the false report, of the signing of the Armistice was received. Parades formed immediately: Flags appeared from every window and from all balconies. The cafes and restaurants were crowed to capacity. Everybody seemed happy. The next morning, however, the real facts were learned and the spirits of the people somewhat damped.


Again stern orders were given to roll our packs for a final drive. It was now twenty minutes to eleven, November 11th, 1918. We fell in line and marched onward.

We had had no official word yet that the armistice was to be signed. In fact we had heard so often about Germany's peace talk that we paid no attention to wild rumors.

Exactly at eleven o'clock, came the message from Marshal Foch's headquarters, the "Armistice was Signed." Instantaneously wild shrieks, shouts and yells of thousands and thousands of voices could be heard. The night had been a thing of horror! Daylight brought her joyful tidings to thousands of wearied fighters! Visions of home and dear ones, of transports homeward bound, waiting for the boys who answered the call of their country - the boys in khaki - the Yanks!


As noon approached, we became conscious of an unusual quietness all around us. Firing of all kinds had almost entirely ceased. The Germans were not firing even a machine gun, though our artillery continued to send over a shell now and then. The Germans occupied the crest of the ridge along the river, and if they had had sufficient numbers, could easily have cleaned us up. After eleven o'clock, all firing ceased entirely, not a sound any where. Soon everyone was talking about it. No word had reached us yet.

A wounded fellow from our company was discovered, down near the river bank, where he had laid since before daylight. Getting a stretcher, McDermott and I went to him and dressed his wound. He was shot through the hip, and just about unconscious, as a result of his exposure to the cold. We wrapped him in a blanket, and laid him on the stretcher.

While we were getting ready to take our wounded man to the rear, a runner appeared' with the official news that an Armistice had been signed. Most everybody let out a few healthy yells, but I did not. For one reason, didn't feel much like yelling. I had some difficulty getting three more fellows to help me carry the stretcher. The one I did get had to stop every few minutes and rest. I kept urging the necessity of getting the fellow under medical care as soon as possible, for he was badly in need of attention. As we had to go back along the river bank to where we had crossed during the preceding night, I had a good opportunity to see just what we had done, and the hazardness of our undertaking. 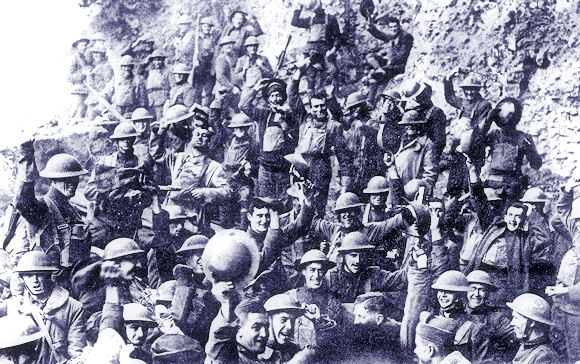 On November 11, the authorities deemed it advisable to keep all men off the streets and accordingly issued orders that all patients were to be confined to their quarters. Across the street from the Globe Hotel was a large bulletin board. About noon, a large printed poster was hung there which soon attracted eager and interested groups of people. After reading, they gave vent to their feelings in various ways. Some wept; some shouted for joy; some tossed their hats in the air and embraced their comrades. Little children and older men and women ran along the streets shouting 'Fini La Guerre.' In the evening a band appeared and judging from the general appearance of of the instruments, they had not been usd for some time. It was also quite evident that those playing them had not had a great deal of preliminary practice. The band passed in front of the hotel and we were able to recognize, by use of a little imagination, that they were trying to play The Star Spangled Banner. We appreciated the effort and applauded.

I thought of what had happened in the past two months, of what I had experienced in that short time and was swept by a peculiar and indescribable feeling. I was glad. Glad that the war was over, glad for those people who endured four years of misery and hardship, and who were now to know better conditions. I though of home and how the folks at home felt when they received the same good news; of other folks whose loved ones would not come home, and what the stopping of fighting meant to them. It was the end of the most terrible four years of warfare the civilized world had ever known.

On Monday at 11:30 am when the sound of cannon boomed the joyful news that the longed for peace had come ... The French seemed stunned at first--they couldn't in a moment throw off these four years of horror and grief. But [we in] the Red Cross turned out strong. [Outside, in the street], a drum appeared from somewhere ... and in a moment the crowd was singing the Marseillaise. So many people were crying that it was a little difficult. Then a procession formed ... If you could have seen me marching between a Tommy and a wounded Poilu, the latter helping me carry the flag with his good arm. A French boy scout carried the French Flag. The whole of Paris seemed to join in the parade. You never saw anything like it. 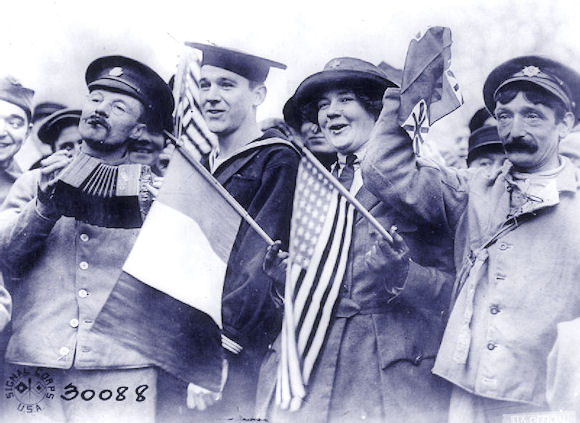 Somebody came out waving a white flag. An American officer stepped forward to greet the German. Then the German kids started coming down. We celebrated that day with the German soldiers. They came down and we mixed all up. Some of them could speak English and we could speak German. . . They were glad to see it over with, too.


Nov 11: Fighting stopped.We hardly knew what to do with ourselves for a while it seemed rather queer to not hear the screech of a shell or the sharp reports of rifles and machine guns. Tents were pitched in a nearby field the farmers furnishing straw to floor them with and we could have fires, smoke or anything else after dark.

On the morning of Nov 17th we started on a hike for Germany with the French making about 15 miles to a place called Dikilvenue where the company slept in a brewery and in the morning started on another hike to Borsbeke where we stayed for two days.


FINALLY CAME NEWS of the Armistice. Somehow we could not believe it was true the war was actually over. Then, on Dec. 7, we saw a beautiful sight. Here came a passenger train flying U.S. flags. We climbed aboard. We were leaving German territory. I had been in a prison camp only 58 days, but felt as if I had been there 58 years.

After the Armistice, those of us not involved in the Occupation were encouraged to seek educational opportunities. I studied French at the Sorbonne. Later on, this training led to Douglas MacArthur appointing me to the faculty at West Point. It changed my life completely.