Recommended: A Hundred Years After the Armistice, from the New Yorker 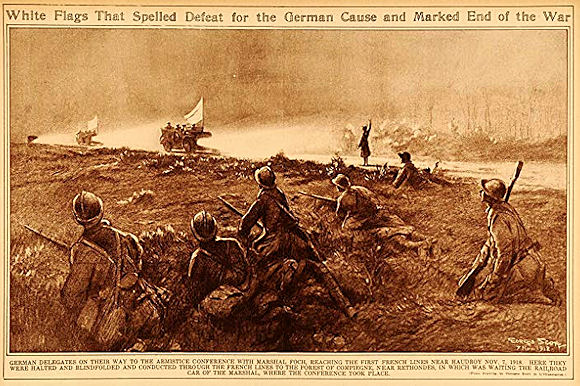 From: New Yorker, 5 November 2018
With Photos and Illustrations from Steve Miller

For millions of soldiers, the First World War meant unimaginable horror: artillery shells that could pulverize a human body into a thousand fragments; immense underground mine explosions that could do the same to hundreds of bodies; attacks by poison gas, tanks, flamethrowers. Shortly after 8 p.m. on 7 November 1918, however, French troops near the town of La Capelle saw something different. From the north, three large automobiles, with the black eagle of Imperial Germany on their sides, approached the front lines with their headlights on. Two German soldiers were perched on the running boards of the lead car, one waving a white flag, the other, with an unusually long silver bugle, blowing the call for ceasefire—a single high tone repeated in rapid succession four times, then four times again, with the last note lingering.

By prior agreement, the three German cars slowly made their way across the scarred and cratered no man’s land between the opposing armies. When they reached the French lines, they halted, the German bugler was replaced by a French one (his bugle is in a Paris museum today), and the German peace envoys continued their journey. At La Capelle, flashes lit up the night as the envoys were photographed by waiting press and newsreel cameramen, then transferred to French cars. Their route took them past houses, factories, barns, and churches reduced to charred rubble, fruit trees cut down and wells poisoned by retreating German troops. “It appeared to me that the drive was intentionally prolonged in order to carry us across devastated provinces and to prepare us for the hardest conditions which the feelings of hatred and revenge might demand,” one of the German passengers later wrote. The envoys next boarded a railway carriage that had once belonged to Napoleon III, who was forced to surrender most of Alsace and part of Lorraine to Germany in the Franco-Prussian War.

Finally, the train pulled into a clearing in the forest of Compiègne, near another train occupied by an Allied delegation headed by Marshal Ferdinand Foch, the Allied commander-in-chief...
(Photos from Steve Miller)