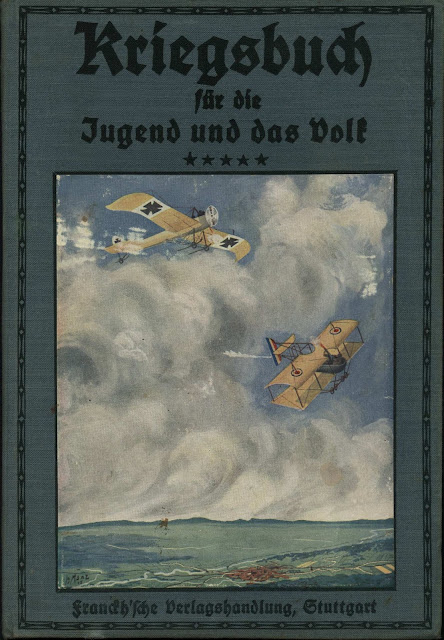 From: "The Technology of Air Power During the Great War," by A. Gilam, in Computers Math. Applications, Vol, 26, No. 6

The reliance on technology during the Great War is demonstrated from its very beginning. Looking back at the war records, one is inevitably impressed by the rapidity of the mobilization that was made possible by the access to telegraph and railroad networks. The  German army and its air force began mobilizing on 1 August 1914, and on the same day, the French began making their own preparations. Three days later, the Germans invaded Luxembourg and Belgium, and as a result, the United Kingdom immediately entered the war. It took only a few days for the British Expeditionary Force to move into northern France. On 11 August, seven days after Britain joined the Allies, the first Royal Flying Corps crewmen began arriving in France. There is hardly a previous war effort that started with such a rapid mobilization. At this very early stage of the Great War, the conventional military wisdom was that aircraft is suitable for the detection of enemy troop movements from the air. Instead of relying on horse-mounted scouts that would report back to the field commanders on enemy concentrations, the airplane would perform the task more efficiently. Small wonder that in the early months of the war, ex-cavalrymen were often selected for pilot training.

Because of the emphasis on aerial reconnaissance, at the early stage of the war, airplanes were not even equipped with weapons. The typical BE2a used by the British usually lacked a machine gun or any other type of armament. Only when the war stabilized and the war effort concentrated on trenches was the need for the prevention of enemy reconnaissance fully perceived and appreciated.

The introduction of aerial warfare was accomplished with the help of major technological improvements. First in trying to mount a machine gun that could shoot through the propeller blades were the French, but their accomplishment was meager. All they came up with were deflection metal plates welded to the propeller blades that would deflect the bullets away from the propeller itself. After thorough examinations and testing, Anthony Fokker [a Dutchman], who worked for the Germans, invented the interrupter gear that synchronized the motion of the propeller to the pace of the machine gun. For the first time, a machine gun could shoot straight through the propeller without actually harming it, and thus the modern military aircraft came into being.

Equally decisive was the advancement in the field of aerial photography. Individual photographs, usually taken from an altitude of 16,000 ft., could capture an area of two by three miles. The photos would be taken by semi-automatic cameras, measuring three by four feet, which were mounted vertically to face downward and their shutters operated by a wind-driven generator. These photographs would then be assembled and would pinpoint even the most minute shifts of machine gun posts, artillery positions, supply lines and troops.

The synchronizing device and the improvement of aerial photography led to the second phase of the air war, which started in late 1914 and ended in early 1916. During the second stage, not only did aerial reconnaissance became more important, but the need for deterrence also became critical. It was imperative to keep the enemy observation airplanes from entering one’s own air space. Again, during this period success or failure depended on the mastery of technology.

Even though the Germans were the first to introduce into the battlefields the synchronized machine guns mounted on the Fokker E-types, they failed to capitalize on their technological edge. They did not produce the numbers required to guarantee an absolute military superiority. At the end of October 1915, they had only 55 Eindecker types in the battlefield and by the end of the same year, only 86. The delay at the German production lines enabled the English to turn to pushers and the French to develop the Nieuport 11, whose machine gun was mounted on top of the upper wing. The Allies tried to offset the technological gap by relying on superior numbers and on the aggressive Trenchard Doctrine, which advocated a relentless attack on enemy aircraft no matter how high the costs might be. 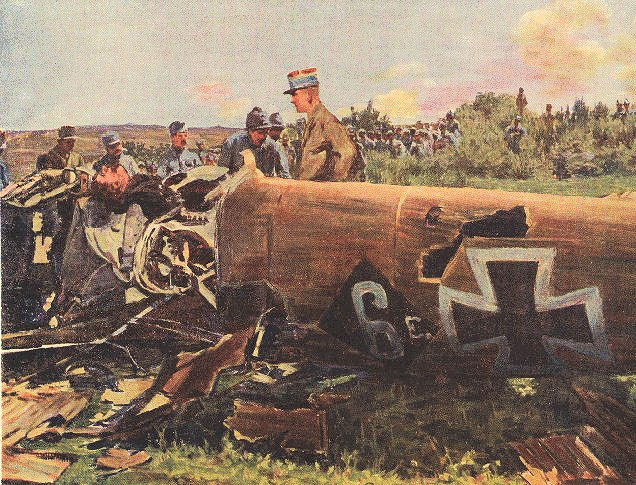 Verdun and Somme, the lengthy and bloody battles of 1916, mark the third stage of the air war. It was during these two catastrophic confrontations that the real value of aerial reconnaissance was first fully understood. Due to the awesome consequences of artillery direction from the air, the casualties became astronomical. On the first day alone on the Somme, the British Army suffered 60,000 casualties, 15 times its loss on D-Day almost 30 years later. Thus, aerial photography of enemy positions and the prevention of enemy activity in one’s own territory now became a major priority for the entire war effort. Instead of being perceived as auxiliary, air services had become major components of any military action. It is small wonder that the number of dog fights had increased and the number of airplanes participating in battles had multiplied.

Of necessity, the accelerated activity in the sky created a demand for faster and more powerful flying machines. Consequently, the English introduced the Sopwith Pup and the French the SPAD VII, the latter equipped with a power plant producing 150 hp. The Germans, for whom this stage started with the outmoded Eindeckers, realized that they would have to close the technological gap fast in order to survive. At the end of 1916, they began mass-producing the new fast Halberstadts and Albatroses (D types), armed with two guns. As of the battles of Verdun and the Somme, the quality of the hardware would become a major factor in gaining the upper hand.

As we reach the fourth stage of the air war, we definitely focus on a race in the field of technology. Since the introduction of the Albatros D-III in early 1917, the German air service could rely on a fast, powerful, and sturdy airplane that had revolutionized the air war. Due to the strong plywood construction of the fuselage and wings, German pilots now controlled superb flying machines that could dive, turn, and bank rapidly without damaging the airplane. From the very beginning, the Allies realized that their airplanes could not match  the new Albatroses. The major confrontation between the different types of machines occurred in April 1917, along the northern front (particularly at Arras). The English and the French air services were beaten so badly by the Germans that they called this dreadful month “Bloody April.” Throughout the rest of the year, British and French aircraft manufacturers were urged to upgrade their output. Only with the arrival of such powerful fighters as the Royal Aircraft Factory SE5, the Sopwith Camel, and the Nieuport 23 was the balance shifted once more. The Germans, too, recognized how decisive the technological edge was for the entire war effort, which is why they came up with their Amerikaprogramm, calling for the establishment of new aircraft wings before America’s participation in the war would secure the victory for the Allies.

The final phase of the air war further demonstrates how technology had revolutionized modern warfare. Early in 1918, the German high command decided to break the stalemate on the Western Front by launching the "Great Offensive," which would crack enemy trench lines prior to the involvement of the Americans in the war. This time, the penetration of enemy trenches was preceded by strafing actions launched from any available aircraft. By using air-to-ground war, aiming at infantry and artillery positioned in the trenches, the Germans finally managed to achieve the impossible, but the five offensives launched by Ludendorff eventually stalled and with American help, the Allies were able to stop the German initiative.

Next came an Allied assault on the Germans, and this time the utilization of the tank and liquid fire made trench warfare totally obsolete. Further than that, tactical air fights now became more regular and their impact more effective than before. The point is well made by aviation historian Malcolm Cooper: “Commencing with the British attack at Cambrai in November 1917, the systematic use of aircraft either to help break through defensive positions or to hold up a victorious advance became more and more common. In the great offensive of 1918, close aerial support of this nature was an important part of the tactical repertoire of both sides.” 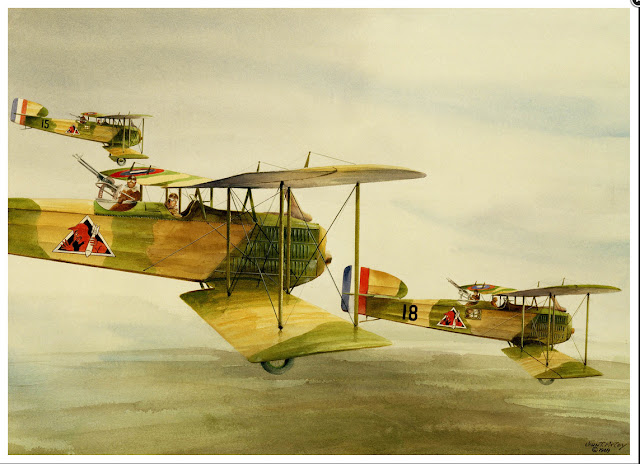 The American intervention in the war further highlights the importance of air power. Under the influence of Colonel Billy Mitchell and General Mason M. Patrick, an army air force consisting of 600 Allied airplanes participated in the offensives on the St. Mihiel salient and the Meuse-Argonne. On both occasions, Allied aircraft joined infantry and artillery forces in the effort to smash enemy troop concentrations and supplies.

This was the military experience that eventually led such military thinkers as General Giulio Douhet, General Hugh Trenchard, and General Billy Mitchell to prophesy that the future of warfare depended on air power. The lesson they drew from the Great War was that the airplane became the most crucial factor in the pursuit of any military action in the modern age. Small wonder that the most common prescription for preventing future aggression in the aftermath of the Great War was understood to be the elimination of air power held by any potential aggressor.