Captain Dean M. Gilfillan (1890–1935), one of Ironton, Ohio,'s world war heroes.  died this morning at the Deaconess hospital. A graduate of Yale, he served as captain in the AEF's tank corps and was awarded the Distinguished Service Cross, the Croix de Guerre, and Purple Heart for his war service. 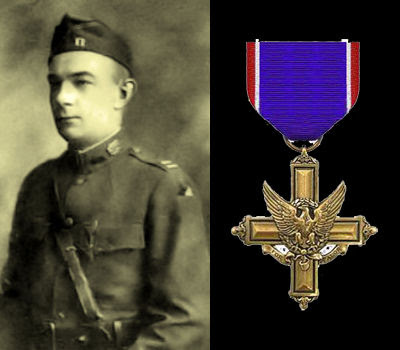 Glfillan commanded Company A of the 354th Tank Battalion on the opening day of the Meuse-Argonne offensive in support of the 28th Pennsylvania Division. At first in reserve, Gilfillan was forced to commit his tanks when a strong crossfire from German machine gun nests held up the advance.  The Doughboys moving behind the tanks were unable to advance through the deadly fire which was becoming more intense and accurate as the morning fog lifted.  The tanks were forced to fall back and join them around the villages of Varennes and Cheppy.
Gilfillan's tank was hit twice by artillery fire during the advance and began to burn. He was also wounded by machine gun fire. Nevertheless, he remained in his tank, destroying two of the machine gun positions and wreaking havoc on a column of enemy infantry trying to reach Cheppy. As the fire worsened and the threat of an explosion grew imminent, Gilfillan was force to abandon the tank, only to be wounded a second time by fragments from a nearby artillery explosion. Evacuated from the battlefield, Capt. Gilfillan soon found himself in a hospital bed alongside Lt. Col. George Patton, who had also been wounded in the fighting.
After six months recuperation he returned to Ironton and worked with the Ryan and Gilfillan Company. His early death from respiratory disease in 1935 was thought to be due to complications from being gassed in the war, possibly during the St. Mihiel Offensive.  Shortly after his return home, Ironton’s first professional football team was organized and took on the name “Tanks” in honor of Gilfillan and other World War I tank soldiers. His military career and act of heroism served as the inspiration for The Patent Leather Kid,  one of the last films of the silent era, released in 1927. Its star, Richard Barthelmess, was nominated for best actor at the first Academy Awards in 1929.
Thanks to Joe Unger for this account.
Sources: Ironton Tribune, Find a Grave, Treat 'em Rough by Dale Wilson, IMDB