Best Books on the Great War in the Balkans: A Reading List 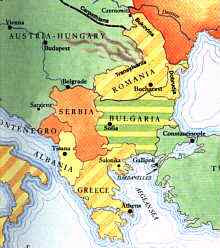 Dr. Richard C. Hall is Professor of History at Georgia Southwestern State University. He has written prolifically about the Balkan theater. His latest work include: Consumed by War: European Conflict in the 20th Century &The Modern Balkans: A History

John C. Adams. Princeton: Princeton University Press, 1942. This is a dated but still riveting history of the harrowing Serbian retreat across the Albanian Alps in 1915 and 1916 after the Austro-Bulgarian-German assault.

2. The Road to Sarajevo

Vladimir Dedijer. New York: Simon and Schuster, 1966. Although in need of an update, this is the classic account of the steps leading to the Sarajevo assassination of 28 June 1914.

3. The Politics of Diplomacy: Britain and France in the Balkans in the First World War

David Dutton. London: Tauris, 1998. An academic study of the intricacies of the British-French relations during the First World War, this book provides details on the difficulties of coalition warfare.

Cyril Falls. Nashville: Battery Press: 1996, 2 vols. First published in 1935, this book remains the definitive account of the British effort on the Macedonian Front during World War I.

Richard C. Hall. Bloomington: Indiana Univ. Press 2010. An overview of the Bulgarian effort during the First World War and the specifics of the decisive battle that knocked Bulgaria out of the war ending the fighting in the Balkans in 1918.

Richard C. Hall, London: Routledge, 2000. Examines the background to the fighting that ended in July 1913, sputtered off and on for a year, and then reignited for another four years.

George B. Leontaritis. Boulder: East European Monographs, 1990. The complicated course of Greek politics during the First World War is presented here in an academic context.

Andrej Mitrovic. West Lafayette: Purdue University Press, 2007. A comprehensive account of the economic, military and political issues that Serbia faced during the First World War. (Translated from the Serbian.)

9. The Gardeners of Salonika

Nigel Thomas and Dusan Babac. Botley, Oxford: Osprey, 2001. Good details on the national militaries active in the Balkans during the First World War.