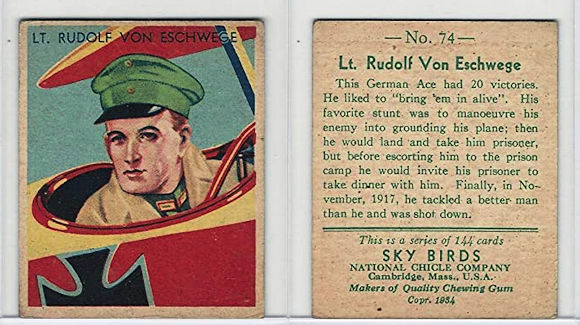 In the skies over the Salonika Front, even with German assistance, the Bulgarians were often outnumbered 10-to-1. All of their planes were observation types, save for one.

This lone fighter was German, piloted by Leutnant Rudolf von Eschwege (1895–1917). He had responsibility for the British end of the front—protecting reconnaissance flights, intercepting bombers and defending the 10th Bulgarian division. Defying the odds, he was so successful that the Bulgarians nicknamed him the Eagle of the Aegean Sea.

In August 1914 von Eschwege was a cadet. Quickly commissioned, he briefly served in combat on the Vosges Front with the 3rd  Jäger zu Pferde Regiment. Soon, like his fellow cavalryman Manfred von Richtofen, von Eschwege transferred to aviation training. Despite several crashes, he qualified in July 1915, and was assigned to an observation squadron. In May 1916 he moved to a Fokker Eindecker and escorted observation planes. After a few months he leapt at the opportunity to serve with the Bulgarians on the Salonika Front. In over a year flying over the Western Front he had scored no victories.

At first he was based at Xanthi, Bulgaria. Almost immediately after his arrival, he intercepted a flight of obsolescent Farman bombers and shot one down. However, it crashed in the ocean, and no witnesses could be found to confirm the victory.

Then he was transferred to Drama in Greece, where he downed his first confirmed plane on 25 October 1916, when he surprised two Nieuport 10s strafing soldiers. He fired on one, and his gun jammed; in fact his gun jammed 23 times, but the enemy crash-landed in Bulgarian territory. Thereafter, he always loaded his machine gun belts himself. The Bulgarians started calling him the Eagle of the Aegean Sea. Later he was also called the Richthofen of the Balkans.

After his unremarkable stint on the Western Front, von Eschwege had found his niche. He didn't hesitate to attack multiple aircraft, and he demonstrated both bravado and magnanimity toward his opponents. Once he forced an aircraft down, landed next to it, and personally captured the pilot. Another time, he shot down an observation plane, which crash-landed in Bulgarian territory. Subsequently he visited the crew in the hospital, bringing cigarettes and chocolates.

His success was rewarded; his Eindecker was replaced by a new Albatros D-III. This up-to-date aircraft enabled him to be even more aggressive. In May 1917, he took on two British planes, flying between them. His plane was hit by their gunfire, his arm was injured, and the fuel tank was punctured, but flying one-handed he regained control and returned to do battle again, then performed a dead-stick landing at his home field.

Eventually the British observation pilots were tending to avoid him, and he became frustrated at the lack of opportunity to add confirmed victories. The Pour le Mérite (a.k.a. Blue Max) award always seemed just beyond his grasp, as the threshold kept rising.

On 3 October 1917, after downing 16 planes, he decided to try balloon-busting. He chose the balloons at Orljak, which directed artillery fire against the Bulgarians in the Struma Valley. These were hydrogen-filled and anchored to the ground. They were usually raised to about 500 feet, so that if enemy aircraft were spotted the balloon might be winched down to safety. If available, anti-aircraft guns were emplaced around the balloon. Also, the observer was provided with a parachute so that he could bail out if necessary.

On the first pass, von Eschwege failed to ignite the gas bag, even though he was using tracer bullets. It took him four passes to destroy the balloon, during which time the observer had jumped to safety. Von Eschwege, like others before him, had learned that balloons were tricky targets.

A few days later he made another run at an Orljak balloon. He was successful although the observer’s parachute fouled on the basket and thus he was killed. The ground crew were incensed because they felt that von Eschwege should have broken off his attack once he saw that the observer was trapped and helpless. 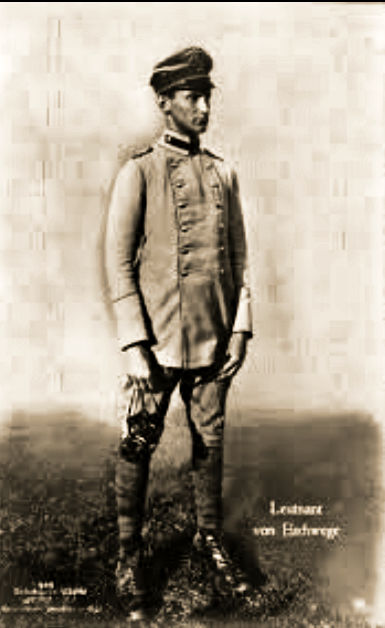 On 21 November 1917, now with 19 confirmed victories, von Eschwege returned to Orljak determined to get number 20. This time it seemed really easy; the balloon was way up at 2,500 feet, and there was no anti-aircraft defense. He fired on the balloon, and when he passed by the fireball of a massive explosion burned the fabric off of his wings and he immediately plummeted to his death.

It was a booby trap. The sappers had fitted out the balloon with a straw-filled dummy observer, a barrel loaded with explosive and a wire to a detonator on the ground. When von Eschwege's plane was close enough they blew the charge.

The Royal Artillery celebrated, but the Royal Flying Corps (RFC) regarded the circumstances as a bit of bad form. The official British history says:

He came to his end as a result of a legitimate ruse of war, but there was no rejoicing among the pilots of the squadrons which had suffered from his activities. They would have preferred that he had gone down in fair combat.

The RFC dropped this message on the Drama airfield:

To the Bulgarian-German Flying Corps in Drama. The officers of the Royal Flying Corps regret to announce that Lt. von Eschwege was killed while attacking the captive balloon. His personal belongings will be dropped over the lines some time during the next few days.

The next day the Germans dropped their reply:

To the Royal Flying Corps, Monuhi. We thank you sincerely for your information regarding our comrade Lt. von Eschwege and request you permit the accompanying wreath and flag to be placed on his last resting place.

Von Eschwege was buried in Greece with full military honors rendered by the RFC.

For the destruction of the final balloon, von Eschwege was credited with his 20th confirmed victory (26th with unconfirmeds). Neither he nor his plane was replaced, so the Allies gained complete air superiority over the Salonika Front.

Sources include: https://owlcation.com/humanities/About-World-War-1-Rudolf-von-Eschwege-Sole-German-Fighter-Pilot-in-the-Balkans and Alan Wakefield of the IWM and the President of the Salonika Campaign Society