Alaska in the Great War

Many individuals from Alaska served in the wartime effort. Even before the United States joined the war Alaskan women joined the Red Cross and Alaskan men traveled to Canada to enlist and fight with British Expeditionary Forces.

In Alaska more than 10,000 men enlisted to serve between 1917 and 1918, though only 2,200 of these enlistees were eventually inducted into service. Most of these 2,200 soldiers were sent to military bases in Alaska for training, while some were transported to bases in the Lower 48. Few of the 2,200 inductees traveled to Europe and participated in battle due to the war's end in November 1918.  About 85 Alaskan servicemen died during the war, two from combat wounds, the rest from disease,  mainly influenza or pneumonia induced by the flu. Though Alaska Natives and other ethnic minorities pursued enlistment, most were rejected for induction.

The war impacted Alaska in many ways. While salmon canneries marketed and supplied their goods to Europe and its armies, they also suffered from a labor shortage as workers left Alaska to serve in the war. Although some Alaskan schools trained cadets for war and Alaskans were encouraged to purchase war bonds to help fund American involvement in the conflict, not everyone supported the war. Some Alaskans hoped for peace and the war's end. Xenophobia, an irrational dislike or fear of people from other countries, against those with Germanic ancestry in Alaska was such a problem that Alaska's Governor J.F.A. Strong issued a 1917 Proclamation reminding Alaskans that; “no word or deed on the part of American citizens should operate to incite racial feeling or create prejudice against those who have come to the Territory for the purposes of bettering their condition and enjoying the inalienable right to life, liberty, and the pursuit of happiness.”

The  Alaska  Territory’s  leading  staples  industries—gold,  fish,  and copper—each  experienced  the  First  World  War  differently,  but  for  each the war marked the beginning of a period of decline. Cutbacks in production  and  employment  resulted  in  people  leaving  the  territory.  Jones (2010)  observed  that  the  notable  exodus  of  population  “had  a  marked impact on the shops, services and trades.”  The  second  decade  of  the  twentieth  century  was  a  time  of  economic  optimism  in  Alaska.  Coal  and  the  construction  of  the  Alaska  Railroad  represented the promise for the territory’s future. Alaska’s coal resources, which  were  assumed  to  exceed  those  of  Pennsylvania,  were  opened  to  leasing  in  1914.  Railroad construction began in 1914, creating  jobs  and  new  communities;  at  its  peak  there  were  4,500  jobs  in  construction of the line (Naske and Soltnick 1987). The railroad provided the  key  that  promised  to  open  the  potential  of  Alaska’s  interior  to  the  world economy. Unfortunately, the promise was short-lived. The Navy determined in the  early  1920s  that  low  quality  and  high  costs  eliminated  their  interest  in  the  coal  fields  in  Southcentral  Alaska.

The war years treated Alaska’s three main industries differently.  The  war was good to the copper and fishing industries; increased war-related demand for each product resulted in expanding production. Copper prices  reached their highest levels in a century in 1916, and the fish pack in 1918 was  almost  three  times  what  it  was  in  1910  (Cole  and  Rasmuson  2000).  The wartime boom in the fishing industry had limited effect on the Alaska population and economy since there was little resident employment in the fishing industry. The salmon packers brought crews from outside for the fishing season (Naske and Soltnick 1987).

Gold  production,  however,  went  the  other  way;  production  fell  in  value  by  almost  half  between  1910  and  1918.  The  profitability  of  gold  mining was limited by an inflexible legal price of gold and rapidly rising production  costs.  Wartime  inflation  tripled  the  cost  of  mining  as  labor  and material became more expensive (Cole and Rasmuson 2000). The war also  had  indirect  eff  ects  on  the  economy’s  collapse  and  the  population  exodus.  Military  service  and  high  wages  in  wartime  industries  outside  Alaska attracted its large population of single men. The rapid rise in prices and  the  shortage  of  shipping  to  export  products  and  bring  materials  to  Alaska made living and doing business more difficult. Wartime spending and high costs likely contributed to the decline in investment in the state. Finally,  the  delay  in  appropriations  for  the  Alaska  Railroad  reduced  employment opportunities (reflections of Andrew Stevenson as referenced in Cole and Rasmuson 2000)

The war years saw a substantial departure of population from Alaska. The White population of the territory fell by 50 percent between 1916 and 1918 (Cole and Rasmuson 2000). Anchorage, Alaska’s most recent boom town, lost  around  3,000  people  (Jones  2010).  The  territory’s  population  fell  by  14 percent between the 1910 Census and the 1920 Census—from 55,000 to 47,000 (Naske and Soltnick 1987). This exodus presented a challenge to businesses in the support sector of the economy since it represented a decline in the market for their products. 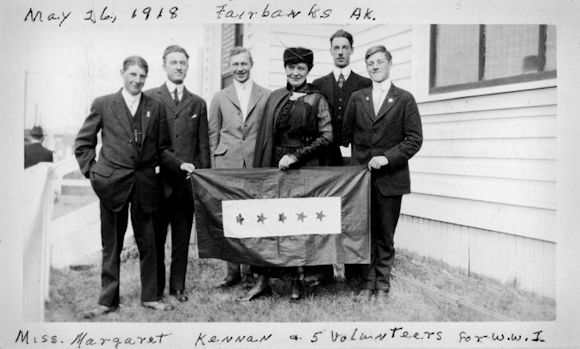 The  postwar  period  treated  the  Alaska  economy  no  better  than  the  war  years.  After  the  war,  Alaska  commerce  declined  by  50 percen percent  (Cole  and  Rasmuson 2000). Both copper and fishing suffered from declining prices that  reflected  the  short  postwar  recession  in  the  United  States  and  the  longer  recession  in  commodity  industries  (Walton  and  Rockoff   2010).  With  the  end  of  the  war  and  the  recovery  of  European  agriculture,  the  demand for both copper and fish fell. In addition, overfishing during the war resulted in a significant decline in the salmon runs; the salmon pack fell by 60 percent between 1918 and 1921 (Cole and Rasmuson 2000).

The  First  World  War  ended  the  “gold  rush”  boom  in  the  North  and  began  the  long-term  stagnation  in  the  Alaska  economy.  As  described  by  historian  Terrence  Cole:  “The  First  World  War  disrupted  Alaska’s economy  as  no  outside  event  had  ever  done  before,  and  set  in  motion  a  downward spiral that continued for years. The traumatic loss in Alaska of businesses, jobs, population, capital, and confidence, equaled the darkest days of any downturn in American history. The Great Depression of the 1930s  left  Alaska  relatively  unscathed  in  part  because  the  economy  and  population  of  the  territory  had  already  collapsed  a  dozen  years  earlier  during the Great War.

When the war ended in 1918 Alaskans serving abroad wanted to return home and take up their jobs and old lives. The seasonality of many Alaskan jobs such as fishing and mining was a concern to both soldiers and former employers. Many wrote letters requesting their discharge in order to make it back in time to make their income for the year. Despite the governor's and others intervention, release from the armed forces was slow and many continued to serve after the war despite their desire to be discharged. Amid this period the Spanish Flu, a dangerous and sometimes fatal pandemic, spread across the world. Thousands in Alaska died, as well as Alaskans serving in the war effort outside of the Territory.