Death at Anchor: The Destruction of HMS Bulwark, 26 November 1914 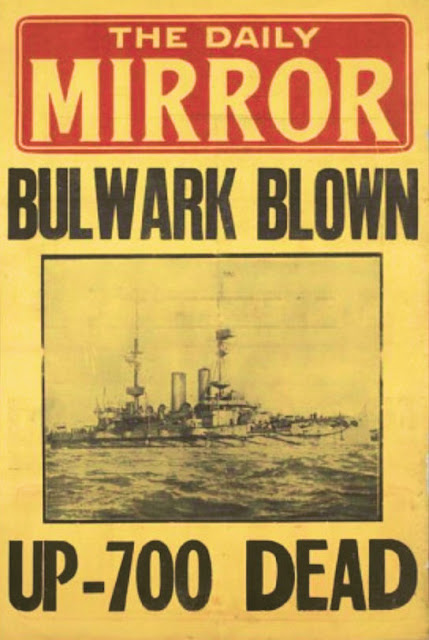 HMS Bulwark was part of the 5th Battle Squadron and at the outbreak of the war was based at Sheerness in order to protect the southeast of England from the threat of a German invasion. On Thursday 26 November 1914, the pre-dreadnought battleship was moored in the Medway Estuary approximately between East Hoo Creek and Stoke Creek when, at 7:50 a.m., a massive explosion ripped through the vessel.

Witnesses on the battleship HMS Implacable, which was moored next to Bulwark, described:

…a huge pillar of black cloud belched upwards... was followed by a thunderous roar. Then came a series of lesser detonations, and finally one vast explosion that shook the Implacable from mastheads to keel.

The band was playing and some of the men were drilling on deck when the explosion occurred. A great sheet of flame and quantities of debris shot upwards, and the huge bulk of the vessel lifted and sank, shattered, torn, and twisted, with officers and men aboard...

Boats of all kinds were launched from the nearby ships and shore to pick up survivors and the dead. Work was hampered by the amount of debris which included hammocks, furniture, boxes, and hundreds of mutilated bodies. Fragments of personal items showered down in the streets of Sheerness. Initially, 14 men survived the disaster, but some died later from their injuries. One of the survivors, an able seaman, had a miraculous escape. He said he was on the deck of the Bulwark when the explosion occurred. He was blown into the air, fell clear of the debris, and managed to swim to wreckage and keep himself afloat until he was rescued. His injuries were slight.

The Commonwealth War Graves database names 788 men from HMS Bulwark as having lost their lives in this explosion. There was only a handful of survivors.

On that afternoon, Winston Churchill (First Lord of the Admiralty) made the following statement to the House of Commons:

I regret to say I have some bad news for the house. The Bulwark battleship, which was lying in Sheerness this morning, blew up at 7.35 o'clock. The Vice and Rear Admiral, who were present, have reported their conviction that it was an internal magazine explosion which rent the ship asunder. There was apparently no upheaval in the water, and the ship had entirely disappeared when the smoke had cleared away. An inquiry will be held tomorrow which may possibly throw more light on the occurrence. The loss of the ship does not sensibly affect the military position, but I regret to say the loss of life is very severe.

The subsequent naval court of enquiry found that shells and other ammunition had been stored in the corridors between the magazines, and that a fault with one of the shells or overheating cordite near a boiler room bulkhead could have started a chain reaction which destroyed the ship.