A Visit to General Haig's Headquarters at Montreuil-sur-Mer

It was at Montreuil-sur-Mer that Douglas Haig, commander-in-chief of the British Army on the Western Front, installed his General Headquarters (G.H.Q.) between March 1916 and April 1919. G.H.Q. moved to this quaint little town, set in a beautiful countryside,  because St. Omer, the old G.H.Q. location, was no longer suitable as the center for the vast operations pending, namely the forthcoming "Big Push" that would come to be known as the Battle of the Somme. 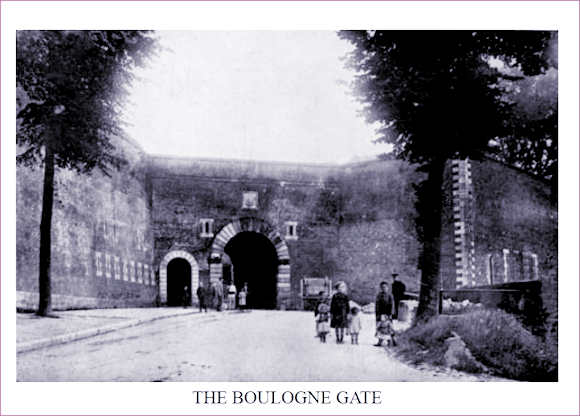 Montreuil-sur-Mer is a commune with a nomal population of about 2,000 located in Pas-de-Calais, 24 miles south of Boulogne-sur-Mer, 135 miles north of Paris, and eight miles from the sea—hence the "Mer" in its name. Montreuil was one of the most pleasant and respectable places one could imagine in France before the war. From the 7th Century there had been strong religious associations for Montreuil, first a monastary, later a shrine and reports of miracles. By the 100 Years War it was heavily fortified and defended by ramparts which still stand today. During the 18th century, it was "discovered" by the aristocracy, who built a number of country retreats in and around the town.  Before the war, it also sheltered a small colony of artists in the summer, attracted by the wonderful panoramas from the ramparts. Montreuil was previously best known as the scene of much of the first part of Victor Hugo's novel Les Misérables. The author had once visited the town and it had left a pleasing impression.

However, in wartime Montreuil would prove to be the perfect headquarters for the British forces. For one thing, it was as close to London as you could be on the continent. From an unofficial history by one of the staff officers who served there:

Montreuil was chosen as G.H.Q. for a wide variety of reasons. It was on a main road from London to Paris—the two chief centers of the campaign—though not on a main railway line, which would have been an inconvenience. It was not an industrial town and so avoided the complications alike of noise and of a possibly troublesome civil population. It was from a telephone and motor transit point of view in a very central situation to serve the needs of a Force which was based on Dunkirk, Calais, Boulogne, Dieppe, and Havre, and had its front stretching from the Somme to beyond the Belgian frontier.

A great general, asked to define in a phrase what was wanted for a Headquarters, said "A central remoteness." It was urged that this seemed an oxymoron. "Well then, if you like, a remote centrality." The finality of that allowed no further argument. Montreuil provided both a central position and a position remote from the disturbances and distractions of traffic, of a large population, of gay social interests. The great Ecole Militaire offered accommodation for the principal offices. There was sufficient billeting accommodation in the town's houses and the neighbouring chateaux. . . [also] Had it not been for those Rampart walks, the toilsome life of G.H.Q. at Montreuil would have been hardly possible. The road from anywhere to anywhere, if time allowed, was by the Ramparts and most went by the Ramparts unless work was hideously pressing.

By 1918, an estimated 1,700 soldiers were working within the town walls. Between 3,000 and 3,500 more were working in or close to the town—bringing the total to 5,000. For three years G.H.Q. dominated the life of the town of Montreuil.  Office space was seized in innumerable buildings for every imaginable military specialty, railroad operations, intelligence, gas warfare, sanitation, interpreters for the Indian Army and Chinese Labor Corps, as well as for the missions of the French, Italian, and American forces.

General Haig himself worked at the Château de Beaurepaire, two miles south of Montreuil.  He was visited daily by his senior staff, the adjutant and quartermaster generals, the director of operations, head of the Royal Flying Corps, and so on. The "Chief" would visit Montreuil at least weekly for the Presbyterian church service there and would then go round the offices. During major operations he would move forward to an advanced HQ,  sometimes in his adapted railway train, but always in communication with Montreuil. King George V and other dignitaries would periodically drop in and visit Haig at the chateau. 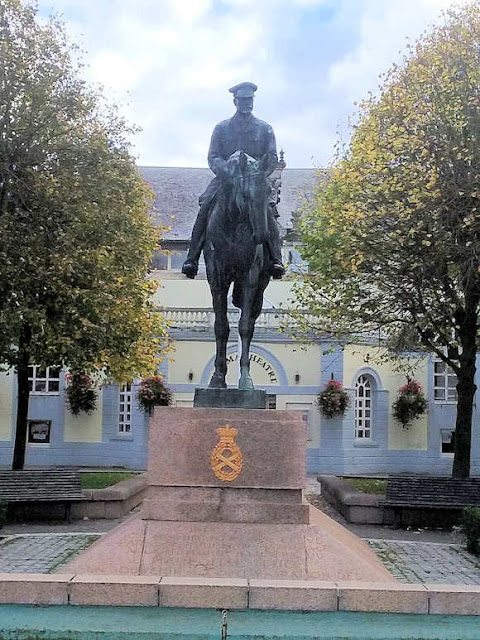 Today the most prominent reference to Montreuil's war service is the equestrian statue of Field Marshal Sir Douglas Haig in the square by the town's theater. It was created by Paul Landowski of Christ over Rio fame and dedicated on 28 June 1931. Nine years later, it was unbolted and melted down by the Germans during the Second World War. It is recast from the original mold and placed in front of the theater on 25 June 1950.