HMS Glasgow: Survivor of Coronel—Victor at the Falklands

John Rickard
HMS Glasgow was a Bristol-class light cruiser, launched in 1909. The Bristol-class cruisers were the first light cruisers built for the Royal Navy after a period when armored cruisers had dominated construction. The Glasgow was thus one of a small number of modern cruisers available to the Royal Navy at the start of the First World War to deal with the emerging threat from German commerce raiders.
The Bristol-class cruisers suffered from a number of minor design flaws. They had been built with a high meta-centric height (the distance between the metacenter and the center of gravity). A high meta-centric height increases the stability of a ship, especially when damaged, but when the ship is undamaged too much stability can produce a ship that snaps back to the upright position after heeling over. This potential for rapid movement back to the vertical made the a difficult gun platform.
Prewar tests also revealed that the armor on the Bristol-class cruisers was inadequate against high explosives. The Glasgow had 2-inch armor over the magazines and machinery spaces and 3/4-inch armor over the rest of  the deck. High-explosive shells were able to penetrate the sides of the ship and could also punch their way through the thinner deck armor.
The Glasgow spent most of her active career overseas. She served with the 2nd Battle Squadron of the Home Fleet during 1910–1911 before being sent to the South American Station (1911), then the West Atlantic (1913), and then back to the South American in 1914 under the command of Capt. John Luce. At the start of the war she was part of Admiral Cradock’s squadron and captured the German SS Catherian on 16 August.
Specifications 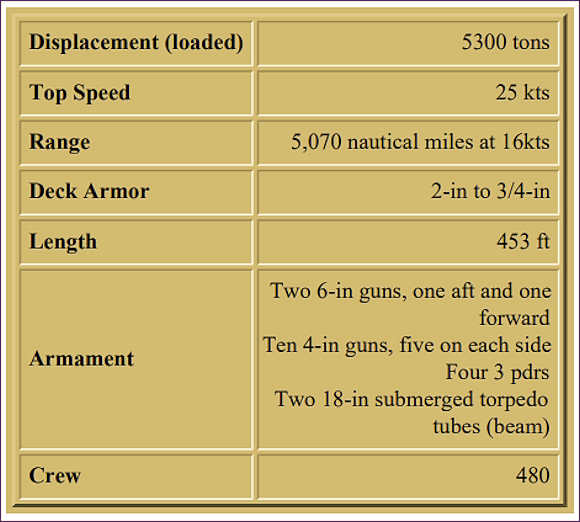 At the battle of Coronel the Glasgow would be the heaviest of the light cruisers, with a clear advantage over the Nürnberg and the Dresden, but she would be dramatically outclassed by the two German heavy cruisers, the Gneisenau and the Scharnhorst, each of which was twice her size. The British heavy cruisers at that battle, the Good Hope and the Monmouth, were both older ships, and were both by outgunned and slower than the two German ships.
In October, Cradock learned that Admiral Maximilian von Spee, at the head of a powerful squadron of five cruisers, including the Gneisenau and the Scharnhorst, was intending to break into the South Atlantic from the Pacific. Cradock decided to take his cruisers into the Pacific in an attempt to prevent this. Cradock sent the Glasgow ahead of the squadron to the Chilean port of Coronel. Von Spee learnt of the presence of the Glasgow and decided to ambush the main squadron. The resulting Battle of Coronel (1 November 1914) was a disastrous defeat for the British. Both the Good Hope and  the Monmouth were sunk. The Glasgow escaped to carry a warning to the last survivor of the squadron, the elderly battleship HMS Canopus.
The Glasgow remained at the Falklands and joined Sturdee’s squadron, sent to catch von Spee. On 8 December von Spee’s squadron made an ill-judged raid on the coaling station at the Falklands. While Sturdee’s two battle cruisers, HMS Invincible and HMS Inflexible, dealt with von Spee’s heavy cruisers, the Glasgow helped to sink the smaller cruiser Leipzig.
The Glasgow, along with the cruiser HMS Kent and the armed merchantman Orama, trapped the last survivor of von Spee’s fleet, the Dresden, at the island of Mas a Fuera, off the coast of Chile. On 14 March 1915, the British squadron shelled the Dresden, forcing her crew to scuttle her before she could be captured.
By 1916, the Glasgow had been transferred to the Mediterranean. There she took part in two hunts for the German commerce raider Möwe, in February and September 1916. In 1917–18, she was part of the 8th Cruiser Squadron, operating in the Adriatic. After the war, the Glasgow served as a training ship (1921–26) before being sold off to be broken up in April 1927.
Source: Relevance, Spring 2010; visit John Rickard's excellent History of War Website at http://www.historyofwar.org for more of his articles.