The AEF organized a Tank Corps in 1917 in France. By 11 November 1918, five heavy battalions and ten light battalions existed, four of which had been in combat. While tank production in the United States was proceeding, very few American-made tanks reached France before the Armistice. The Army acquired all tanks used in combat by the AEF from our allies—heavy tanks from the British and light tanks from the French.

Company C, 344th Battalion, Tank Corps, used this French-made, two-man tank during World War I. The battalion was part of the 1st Provisional Tank Brigade commanded by Col. George S. Patton. The tank was nicknamed “Five of Hearts” because of its identification markings. The French assigned suits and numbers from playing cards to identify tanks. 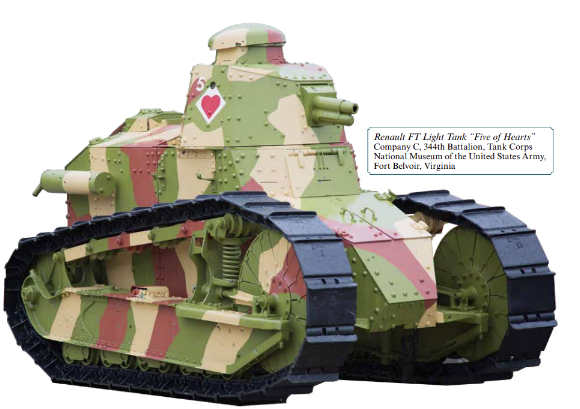 The "Five of Hearts" saw heavy combat in the Fléville sector during the Meuse-Argonne Offensive. During its support of the 16th Infantry of the 1st Division, the turret and 37mm gun mount became so jammed with bullets that they could not be used. Soldiers left the tank on the field of battle after the infantry secured the area but later recovered it. In 1919, it was sent to Camp Meade—the U.S. Army Tank Corps Headquarters—as a memorial to the corps’ service in the First World War.  Today, the "Five of Hearts" survives and can be visited at the Museum of the United States Army, Fort Belvoir, VA.