From: The Complete Lewis Gunner
by an Instructor 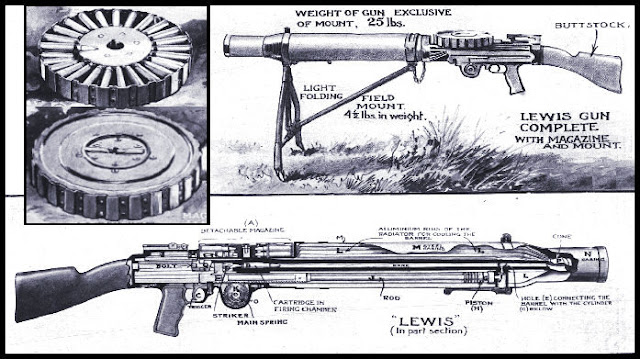 The sequence of instruction set out in this book has been found by experience to be very practical and to give good results. The author claims that it is natural and rational, and the methods followed are the crystallized results of some ten years' experience as an instructor.

The book opens with a General Introduction to the gun. A man's interest is aroused, he is taught the immense possibilities of the weapon, and is straightway shown how the gun is loaded, fed, fired, cooled, and operated. With his attention thus riveted by a good general knowledge, he is now keen and ready to go into technical details. A book which commences with a catalogued description of the parts misses the mark, and resembles too much the old history primer, which at the outset handed out that long list of dates, which was the bane of our schooldays.

With a sincere desire to help instructors, the author, with all humility, wishes to offer a few suggestions. He strongly recommends the method of "Mutual Instruction." The last ten minutes of each hour might well be set apart for this purpose. A man's knowledge is tested, any misconceptions he may have are cleared up, and he gains confidence. The instructor should frequently question his men, and "make haste slowly."

He should not talk too much, but try and make them think. Men love to find out things for themselves; they should always be encouraged to do this, and to ask questions ....

It is hoped that this book will be found useful in all branches of the Service where the Lewis Gun is used. The author's purpose will then be amply justified and his labours rewarded.

General Introduction to the Lewis Gun:

Its Advantages and Characteristics

Its Invisibility and Invulnerability.

The Lewis Gun is essentially a weapon of opportunity.

The position of a Lewis Gun is not advertised, but is kept dark - a sort of "trump card up the sleeve."

The Lewis Gun can be used with great effect in the attack and in open fighting. In this respect some of its uses are:

Magazine Carrier (#2) containing magazines on left of gun (#!=1) at two paces interval. All "drill" with the gun must be done smartly. To meet the exigencies of present-day warfare, it is advisable that some of the following movements be done with box respirator, etc.

Section falls in, in single rank, in rear of gun.

Lies down behind gun.

Takes the magazine from No. 2 and places it on gun.

Takes up position 2 yards to the left of gun

Examines all magazines, and holdall.

Reports correct, or otherwise, to No. 1 and passes him loaded magazine.

On the Command - "Action"

Runs forward (about 5 yards) and gets into firing position on target indicated, and loads.

Runs forward carrying magazines and holdall, and lies down on the left of No. 1. Takes out a magazine from magazine carrier.

When No. 1 is ready to fire, No. 2 holds out his right hand just above No. 1's back, and looks for signals from Section Commander.

No. 1 then presses the trigger, and fires in bursts of about one second, stopping to notice fire and aim between bursts. He will continue to fire at the rate of 5 bursts a minute.

No. 1 grips magazine with right hand, pressing back the catch with thumb.

No. 2 presses up the centre block with the tips of fingers of the left hand.

No. 1 takes off empty magazine and passes it upside down under the gun to No. 2.

No. 2 places it inside magazine carrier.

No. 2 takes full magazine in his right hand, and, holding it with the white portion to rear, places it on the magazine post and eases it down.

No. 1 rotates magazine (with right hand) as far as it will go, pulls back cocking-handle, relays, and carries on.

Helped by No. 2 will change magazines, place butt of gun on ground, and wait further orders.

Replaces magazines in carrier, and goes to "Cease Firing" position.

Hand brought smartly to side.

Both arms raised and lowered in line with the shoulder three or four times.