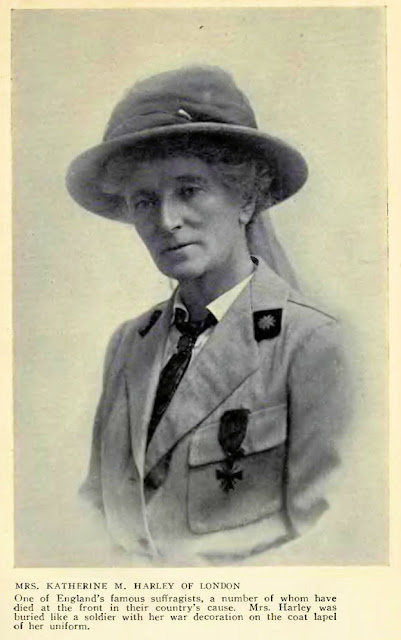 Katherine Harley, née French (1855–1917), was the younger sister of Field Marshal Sir John French, the first commander of the British Expeditionary Force. The family was of Irish origin—the father a serving navy officer based at Chatham in Kent. He died in 1865, and the mother was adjudged insane in 1867, so the younger children were raised by distant relatives. An older sister was Charlotte Despard (1844–1939),  a socialist suffragette and Irish patriot.

Katherine married a cavalry officer associate of her brother, who died in the Second Boer War. They had a daughter named Edith. His family was from , so Katherine went to live at his family pile in a sort of dowager household. Not inclined to be a homebody, in 1910 she joined the National Union of Suffrage Societies (NUWSS) and also became an active member of the Church League for Women's Suffrage. In contrast, Charlotte Despard was a member of both the more militant Women's Social and Political Union (WSPU) and the Women's Freedom League.

By 1913, Katherine’s NUWSS had grown to nearly 100,000 members. Katherine suggested holding a Woman's Suffrage Pilgrimage to demonstrate how many women wanted the vote. Historian Lisa Tickner said "A pilgrimage refused the thrill attendant on women's militancy, no matter how strongly the militancy was denounced, but it also refused the glamour of an orchestrated spectacle."

The pilgrims set off on 18 June 1913. There were three predetermined march routes: to , Carlisle to , and Land’s End to .

Katherine prescribed that they should wear a uniform of white, grey, black, or navy blue coats and skirts, with white or matching blouses. Hats were to be simple, and only black, white, grey, or navy blue. There was a red, white, and green shoulder sash.

Most pilgrims traveled on foot or on bicycles. Wealthy sympathizers used cars or carriages. The intention was not that each individual should cover the whole route. It was said that the pilgrimage succeeded in "visiting the people of this country in their own homes and villages, to explain to them the real meaning of the movement." The pilgrims were accompanied by baggage trucks, and cars picked up those suffering from exhaustion.

An estimated 50,000 pilgrims reached Hyde Park in on 26 July. The march was regarded as a counterpoint against the violent methods employed by the WSPU. The proceeding were as much a demonstration against militancy as one in favor of women's suffrage. Many bitter things were said of the militant women.

PM Herbert Asquith stated that the demonstration had "a special claim" on his consideration and stood "upon another footing from similar demands proceeding from other quarters where a different method and spirit is predominant."

At the war’s outbreak in 1914 Dr. Elsie Inglis (1864–1917), a suffragette colleague of Katherine, decided that women's medical units should be allowed to serve on the Western Front. With financial backing from the NUWSS and the American Red Cross, Dr. Inglis formed the Scottish Women's Hospitals for Foreign Service Committee, known as the "SWH." Over War Office opposition, the SWH sent a women's medical unit to three months after the war started, which included Nurse Katherine Harley. By January 1915 the SWH had staffed an with 200 beds in the 13th-century Royaumont Abbey.

In April 1915, with French support, Dr. Inglis sent a group, including Katherine Harley, to , where they established field hospitals, dressing stations, fever hospitals, and clinics. In the summer of 1915 some of the advanced SWH units, including Dr. Inglis, were captured, but with the help of American diplomacy they were released in February 1916.

Meanwhile the SWH had moved with the "new" Serbian army to the Salonika Front. Katherine commanded an ambulance section, with her daughter Edith serving beside her. Wanting to be based closer to the front so as to shorten travel time Katherine purchased property in Monastir, near to the Serbian army headquarters, an obvious target for Bulgarian gunners. On 1 May 1917 she was having tea in her parlor with Edith and an American friend when a shell exploded close by, blowing out her windows. Katherine was killed by the storm of glass fragments. She was 62.

Although she was neither French nor a soldier, the French general Maurice Serrail (1856–1929), who was the theater commander, ordered a full military funeral for Katherine, and the British allowed her burial at their military cemetery on in Salonika (). Her grave is unique to Commonwealth War Graves Cemeteries in that it is double-sized and bears a non-issue headstone with a cross on top. She is honored in the inscription as “Madame Harley.” The inscription also reads, in English and Serbo-Croat: “On your tomb instead of flowers the gratitude of the Serbs shall blossom there. For your wonderful acts your name shall be known from generation to generation.”

Elizabeth Crawford again: "Not an easy colleague, and not one happy to take orders, she was killed by a shell at Monastir, where, as one woman doctor laconically noted, she had no need to be." For her service to , Katherine was awarded the Croix de Guerre.