“It met with the unexpectedly stubborn and active resistance of fresh American troops.” So wrote General Eric Ludendorff after the Armistice of Germany's last offensive of the Great War. That attack was both launched and effectively smothered on 15 July 1918. Applying a double-swinging-door maneuver at either end of a 48-mile assault line, its immediate objectives were to envelop and capture the major rail junctions at Reims, Epernay, and Châlons. As fate would have it, American units were placed directly in front of the swinging doors at both ends. In the west near Château-Thierry was the 3rd Division of regulars that has been  immortalized through an enduring U.S. Army tradition as the “Rock of the Marne.” 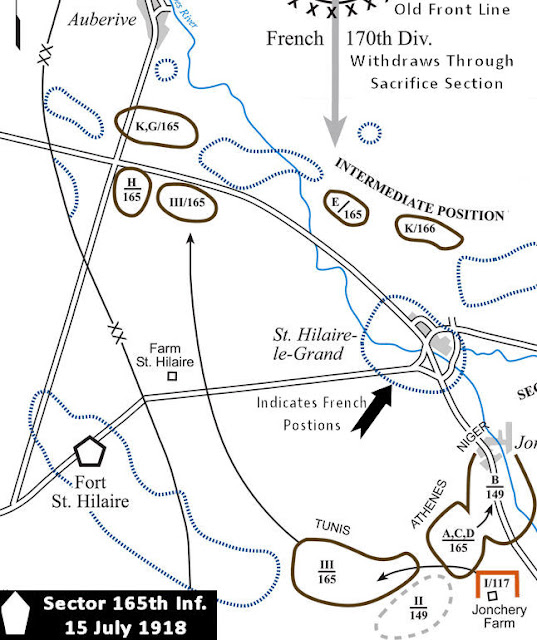 Far to the east, in the Champagne, the 42nd “Rainbow” Division, composed of National Guardsmen from across the nation, was deployed. Their task and level of challenge were the same as those faced by their fellow Doughboys to the west, but their story is less known.  At the cutting edge of the fighting was the Rainbow Division's most famous regiment, “The Fighting Sixty-Ninth” of New York, which had been re-designated the 165th Infantry in the AEF system. Their effort was  romanticized a bit in a famous pre-World War II movie, but make no mistake about it, they were a first-class fighting outfit and would prove it that decisive day. A 2004 U.S. Army study confirmed that 86 years after the action:

The sternest test of the regiment's defensive proficiency came in mid-summer, near St. Hilaire, where the 165th Infantry Regiment, as part of the Champagne defense, stood like a stone wall and smashed the assault of two crack German divisions. At the operational level, this victory broke the German Army's offensive capability and enabled the Allies to transition to the offense. At the tactical level, the 165th Infantry Regiment's stand near St. Hilaire was the zenith of its tactical effectiveness in the defense, combining flexibility; a detailed plan; and the deadly combination of artillery, mortars, cannons, and machine guns.

In his postwar memoir, one of the regiment's most famous members, Father Francis Duffy, captures the intensity of the preparations, opening, and aftermath of the fighting:

Last night he and I made the rounds of all the trenches. General Gouraud had picked it as a probable site for the big attack, so we started around to get the men in right spirits for it. [Major Anderson's] method was characteristic. As the bright moonlight revealed the men in their little groups of two or threes, the Major would ask, “What are your orders here?” The answer always came, quick as a flash, though in varying words, “To fight it out where we are, sir.” “To let nothing make me leave my post, sir,” and one, in a rich Munster brogue, “To stay here until we're all dead, sir.” “Then, will you do it?” “Yes, sir.”

It was 12:04 midnight [sic] by my watch when it began. No crescendo business about it. Just one sudden crash like an avalanche; but an avalanche that was to keep crashing for five hours. The whole sky seemed to be torn apart with sound of the roaring B-o-o-o-m-p of the discharge and the gradual menacing W-h-e-e-E-E-Z of traveling projectiles and the nerve racking W-h-a-n-g-g of bursts. Not that we could tell them apart. They were all mingled in one deafening combination of screech roar, and they all seemed to be bursting just outside.

Around midnight [two days later] we were told that we would be relieved by morning. Why? No one knew. Where were we going? No one knew. The French were to take our place. They were slow in coming. We wanted to be away before sunrise or the enemy would have a fine chance to shell our men as they made their way over the plains. I waited the night there in Kelly's shack, impatient for the relief to come ere dawn. Finally the Poilus, their blue uniform almost invisible by dark, began to appear. I started off with Mr. Jewett down the road to St. Hilaire.

The assault of 15 July 1918 was the last German offensive action of the Great War.  Three days later Marshal Foch would launch the first of the Allies victory offensives.