This is a thoroughly researched and well-written book discussing the U-boat war on the Allies during the Great War from the perspectives of economics, international finance, diplomacy, foreign policy, politics within the nations and the military, military strategy, personal outlooks, and war time production. However, I believe the publishers titled the book in a misleading manner, so as to increase sales, implying the Kaiser ordered an assault. As author Koerver explained, the Kaiser was unwilling to exert control and, frankly, did not have much control over anything, much less order an assault.

Koerver begins with a discussion of world economics: national incomes, steel production, imports, and world merchant fleets. The emphasis was on how national economies depended upon ocean shipping and how Germany was particularly vulnerable. 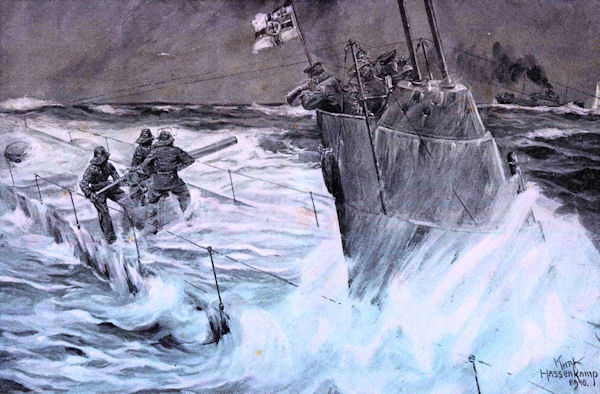 The Kaiser's U-Boat Assault on America is profusely illustrated with photographs, charts, and maps. The maps and graphs appear to have been originally in color and then copied in black and white, resulting in a semi-legible image, losing too much detail. Also, the index is short for a book of this length. Only names are indexed, not topics such as cruiser warfare rules, important for understanding submarine warfare. The author frequently quoted Kurt Riezler, "a close confidant of the Imperial Chancellor" (p.10). Yet Riezler is not indexed or listed in the Primary Personnel table.
Early in the war there was considerable disagreement as to how a U-boat war should be waged: Attack all ships? Only enemy flagged ships? Ignore neutral ships even if their cargoes eventually ended up in enemy ports? Passenger steamers vs. merchant vessels? With or without warning? These discussions, frequently bitter, were four-sided; the Allies, Germany, within Germany, and the United States. Koerver claims that the Navy "…acted autonomously with its own strategy, in opposition to the government…" (p. 44).
While the Kaiser ordered U-boats to allow the crews of attacked ships to disembark before sinking, Grand Admiral Alfred von Tirpitz countermanded this order. Patrick Beesley, later of Bletchley Park, believed that Churchill sacrificed the Lusitania to create a German-American conflict. While President Wilson would oppose passenger liner sinking, the Imperial Navy assaulted whomever Tirpitz wished. It was not the Kaiser's war nor his assault. In fact, while the admirals were mired in politics, the U-boat-commanding lieutenants developed the operational concepts for fighting the war with never-ending disagreements.

The author depicted the Kaiser as indecisive, vacillating, and incapable of deciding to attack anything. Simultaneously, the Imperial Navy had such poor leadership to the point of irrelevancy during the war. Tirpitz was concerned about building battleships to rival the Royal Navy, an expensive losing battle because England could always build more warships faster. As the war raged on, Tirpitz kept building battleships that were only used during Jutland. Instead of effectiveness, the U-boat assault was continually hindered by bickering elements within the Imperial Navy, the Foreign Ministry, and Tirpitz—who refused to acknowledge the one worthwhile weapon that the Navy had.
While the Kaiser was the Supreme War Lord, he apparently did little or nothing to coordinate efforts between the Army and the Imperil Navy. The Schlieffen Plan has been discussed to no end, but there was apparently no planning as to how Germany would wage coordinated war against the expected enemies of Russia, England, and France or how the German public would be involved. Germany's production of iron, steel, and agricultural products dropped because so many men went to war, yet there seems to have been no anticipation of that effect. Even Navy HQ had little control over submarines, as some commanders attacked as they pleased. During 1916/1917, Hindenburg and Ludendorff pushed the Kaiser into the background as they became military leaders of the regime. Meanwhile, 20 U-boats could have been built for one battleship. Through April 1916 there were only 20 ocean-going U-boats, about 62 through 1917, and 76 at war's end. U-boats had six to eight torpedoes, which had a range of only one thousand meters, and half of them usually missed their target. The primary weapon was an 8.8 cm (3.5") deck gun. There were so few U-boats that allowing for transit time from Belgium to England's west coast and refurbishing time back in port, only a few U-boats were on patrol at any one time.
The restrictions Germany placed upon U-boat combat from May to October 1916 saved England the loss of two million Gross Registered Tons. Despite this gift, Great Britain was in desperate condition. Ships could not be built fast enough to replace losses. Foreign exchange reserves were shrinking, making American loans a near-term necessity. Furthermore, the Army had suffered huge casualties with only small gains. The end result might have been President Wilson dictating peace terms to England. Yet Germany was also suffering severe food restrictions, currency devaluation, inflation, and rampant black markets.
Throughout the book, President Wilson was pictured as someone trying to discourage U-boat warfare against unarmed ships, initiating peace negotiations, and struggling to keep America out of the war. His intervention did reduce U-boat warfare, while both sides rejected his involvement as favoring the enemy. His adviser, Edward "Colonel" House, was concerned that German acceptance of a peace initiative would appear as too comfortable with the enemy, resulting in a declaration of war by England and France. Also, in 1916 Wilson was too consumed by his reelection campaign to worry about peace negotiations. While war crept inevitably closer, he did nothing to prepare the U.S.

The proverbial straw came in February 1917 with unrestricted warfare being declared. The U.S. broke off relations while the Imperial Navy inflated its sinking totals to make others believe that unrestricted warfare was working, but it wasn't. Then, in mid-March, U-boats sank three American ships without warning, and Wilson was forced to declare war. Koerver misstated the war declaration votes: the House of Representatives 82 to 6 and the Senate 372 to 50.

One aspect of the U-boat war that Koerver did not cover was the missed opportunity of sinking England's transports bringing the British army to France in 1914. That might have made a difference. At any rate, the German mistakes began years before by Tirpitz's ego trip of building German warships at the expense of everything else. More German submarines with a well-thought-out plan, integrated with other German arms, might have made a difference in the outcome. Instead, no one was in command. At least one historian has called the Great War stupid. The German execution of the war was certainly that.

Read The Kaiser's U-Boat Assault on America not just for the description of war activities but for the unique perspectives of economic, political, and diplomatic forces. These processes caused numerous decisions that led to England's near collapse, the U.S. entry into the war, and Germany's downfall. For a detailed examination of the life and career of Grand Admiral Tirpitz, please read Tirpitz and the Imperial German Navy.