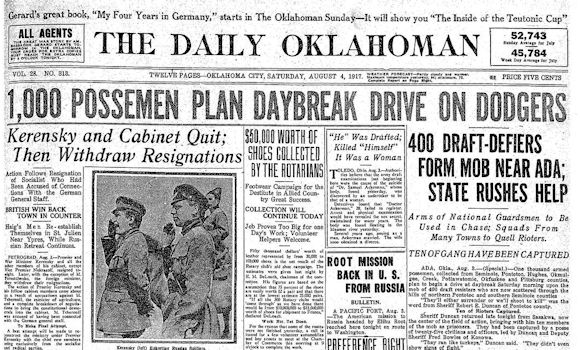 By Nigel Anthony Sellars from the Encyclopedia of Oklahoma

Triggered by opposition to World War I and the draft, this tenant farmers' revolt broke out in three counties along Oklahoma's South Canadian River in August 1917. While antiwar sentiments fueled the Green Corn Rebellion, it actually grew from long-standing grievances many tenants held against local landowners, businessmen, and state and local authorities. The farmers were particularly angered over the growing control of land by small numbers of wealthy landholders who often resorted to rampant land speculation and outright fraud to obtain property. Speculation and falling crop prices had by 1917 forced over half of Oklahoma's farmers into tenancy.

As a result, many tenants and small landowners joined the state's Socialist Party and affiliated organizations such as the Oklahoma Renters' Union. The Socialists proposed expanding the public domain, enacting a graduated land tax, and creating a cooperative marketing system, but some tenants grew frustrated with the political process and turned to night-riding and to direct action techniques copied from the Industrial Workers of the World (IWW). The IWW, however, refused to allow tenant farmers to join, because they were not wage workers. 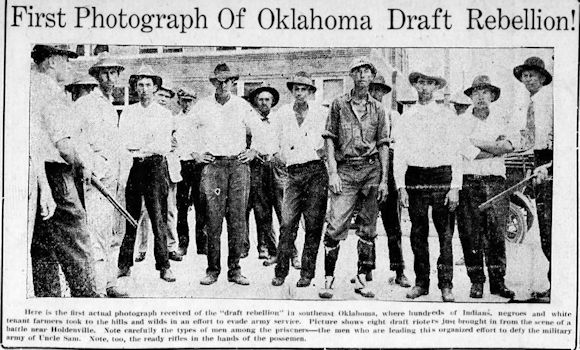 Instead, many tenants joined the Working Class Union (WCU), formed in New Orleans but based in Van Buren, Arkansas. The WCU soon claimed thirty-five thousand members in Oklahoma, although the number is questionable. With the collapse of cotton prices when World War I began, WCU membership rose. It grew more in 1915 when farmers violently opposed a campaign promoting cattle dipping to control the tick-borne "Texas fever." WCU members alleged the chemical dips actually sickened and killed cattle, and they began a campaign of dynamiting dipping vats and destroying the property of county officials.

The WCU grew dormant when cotton prices rose in 1916, but American entry into World War I revitalized the organization. Farmers saw the conflict as "a rich man's war, poor man's fight," and throughout the summer of 1917 the WCU planned its opposition to the new federal Conscription Act. In early August hundreds of men—white, African American and American Indian—gathered at the Sasakwa, Oklahoma, farm of John Spears, an aging Socialist. The men planned to march to Washington and end the war, surviving on the way by eating barbecued beef and roasted green corn, the latter giving the rebellion its name. The rebels began burning bridges and cutting telegraph lines on 3 August, but they soon faced hastily organized posses, which halted the revolt. Three men died in the conflict, and more than four hundred others were arrested. Of those, 150 were convicted and received federal prison terms of up to ten years.

After the rebellion failed, the Oklahoma Socialist Party disbanded. State and federal authorities utilized the revolt in their efforts to suppress the IWW, although neither it, nor the Socialists, had any official part in the uprising. Several years later the events of August 1917 were memorialized in a novel, The Green Corn Rebellion, by Oklahoma-born author William Cunningham.