The Kaiser's Sons at War


Kaiser Wilhelm II and his wife, the Empress Augusta Viktoria, had six sons and one daughter. Five of their six sons were serving frontline officers in the Great War. 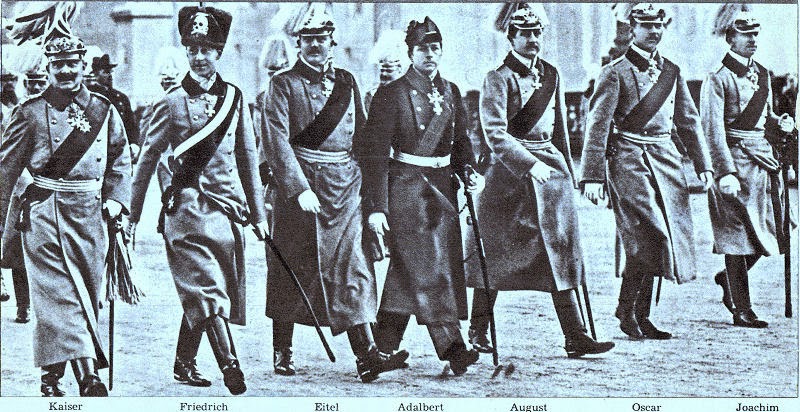 1. Crown Prince Wilhelm — commander of the 5th Army at age 32; instrumental in the Verdun offensive of 1916

3. Prince Adalbert — served in the Kaiserliche Marine on three ships: Kaiser (1914) as lieutenant, Danzig (1917) as lieutenant commander, and Dresden (1918) as commander

6. Prince Joachim — lieutenant in the 1st Regiment of Foot Guards and the 4th Reserve Regiment of Grenadier Guards

This abundance of sons in uniform seems a fair representation of the military culture of Germany at the time and indeed of the Kaiser’s personal inclination. Given how many spare heirs he had on hand, any threat to the succession probably seemed minimal, so risking their lives in military glory could be worthwhile. Ironically, all six survived the war. Five stayed in Germany, although the Crown Prince was briefly exiled from 1918 to 1923, and Prince Adalbert decamped to Switzerland.

These are but royal heirs. European nobility suffered considerable losses of multiple sons and heirs. But the most sons and heirs lost were the countless, mostly now nameless men in the millions on all fronts.