[Editor's Note:
We have varied our Virtual Western Front feature over the past two weeks because we received an excellent article on the two locales we are featuring from our friend Narayan Sengupta. Château-Thierry was featured last week and Belleau Wood today. MH]

Read Part I of Narayan's article covering Château-Thierry at:
http://roadstothegreatwar-ww1.blogspot.com/2014/09/western-front-virtual-tour-stop-36_19.html

After visiting Château-Thierry, we went to Belleau.  Getting there was easy.  Head back out of Chateau-Thierry on D1003 to go back to the Hill 204 American Monument.  Just across from the entrance to the monument is the junction of D1003 and D9.  D9 leads straight to Belleau, four miles away. 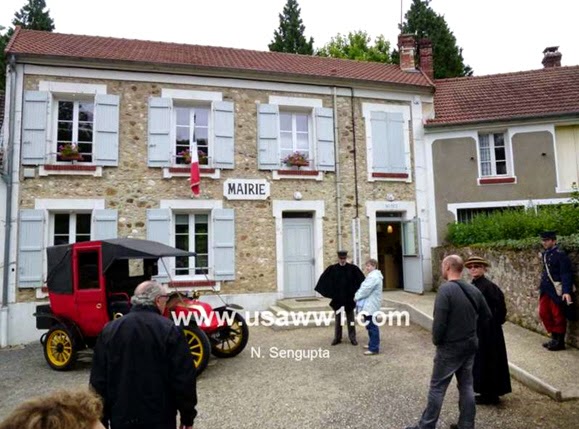 
First stop was the little Hotel de la Mairie (City Hall), which is also the museum that commemorates the Battle of Belleau Wood.  The battle was fought by French, British and American troops against the Germans from June 1 to June 26, 1918.  The Americans suffered 1,811 KIA and 8,000 other casualties.   German figures are inexact, but they were frequently losing numbers similar to their opponents.  By the time the battle ended, the maniacal US Marine defense had earned them the sobriquet Teufelhunden (meaning Devil Dogs).

The museum is tiny, but still worth visiting with its small collection of uniforms, weapons, shaving kits, mess kits, medals, grenades, gas masks, prayer books and other memorabilia.  It also had an “original” (nicely restored) red and black Renault taxi (of WWI’s First Battle of the Marne legend) on display. 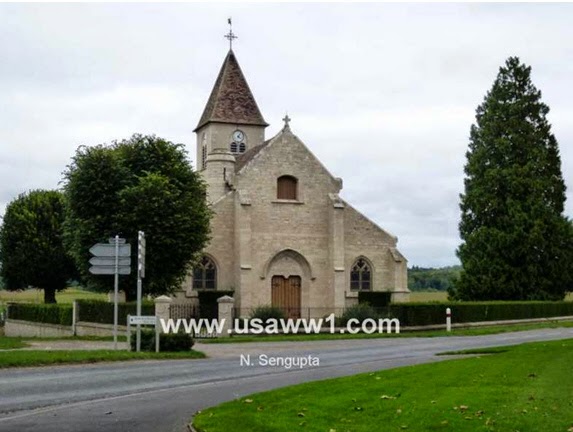 
The distance from the Hotel de la Mairie and the Belleau Wood cemetery (officially the Aisne-Marne Cemetery)/battlefield is just 300 yards.  Between the two is a church.  Apparently the American officer in charge knew that when he gave the order to attack the Germans that the church would get destroyed.  He vowed he would rebuild it after the war.  The story is that he did, thanks to a day's pay very touchingly volunteered by all the American soldiers. 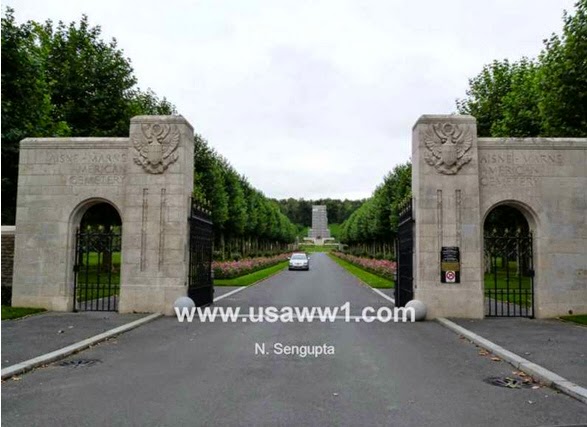 The Entrance to the Aisne-Marne Cemetery.  Belleau Wood Is on the Plateau Behind the Chapel. (Narayan Sengupta)


Next we went to the cemetery and walked around.   The 49-acre cemetery sits at the base of a plateau.  The battlefield is a small one-mile patch of forest atop that plateau.  The cemetery is laid out in the shape of a crescent with two wings and a giant thousand foot long promenade in between.  The promenade leads back to the street on one hand and up to a tall Romanesque tower on the other.  Behind that is the plateau.  The crescent is actually about 12 rows of crosses interspersed with an occasional Star of David.  Each row seems to number in the hundreds.  In total, there are 2,289 dead American World War I soldiers buried here.  They represent all 48 American states of that time; 251 are unknown. 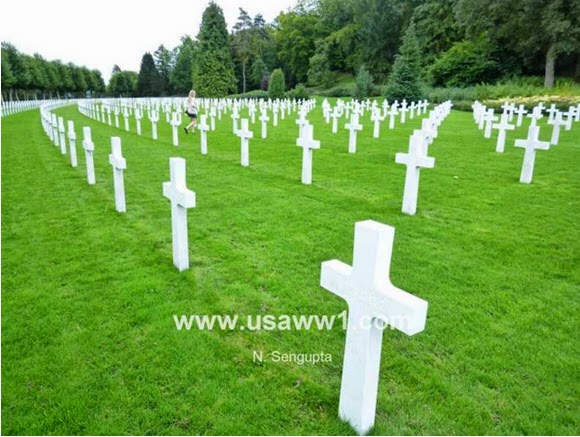 One Wing of the Crescent Layout of the Cemetery
(Narayan Sengupta) 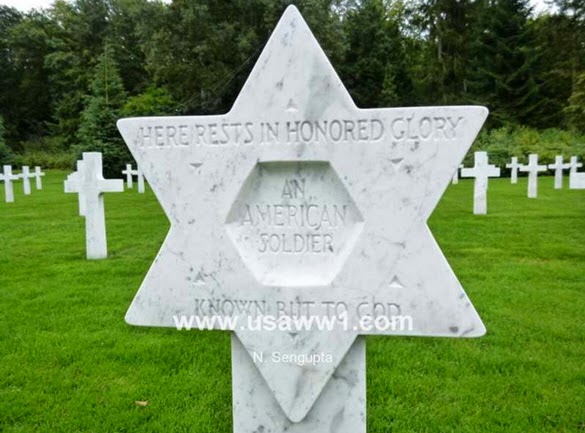 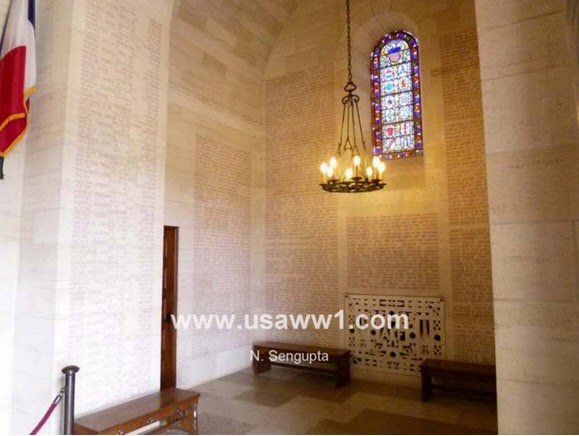 
The Romanesque tower is actually the memorial chapel.  Inside the limestone masonry is engraved the names of another 1,060 missing dead.  Not all are soldiers, as there are the names of airmen too.

There are two big American flags atop giant flagpoles at the Belleau Wood Cemetery.  We helped lower the flags as the place closed, and then we made a two-minute drive up to the small plateau that is above/behind the cemetery.  That is the actual Belleau Wood battlefield.

The plateau has many things to see.  But we are short on time and only had time to see the little artillery park of captured German artillery and unexploded shells by the parking lot.  If the trees weren’t there, then we would be able to overlook the cemetery.  After the battle, with the trees gone, that would have been the case. 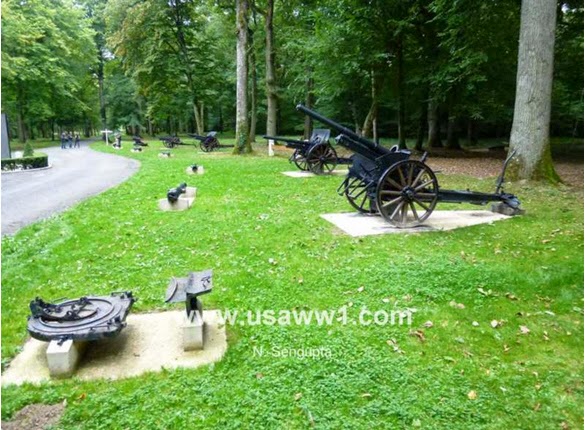 A Portion of the Artillery Park (Narayan Sengupta)


We saw little other than the little artillery park.  But there is more.  From previous trips I still remember the scared landscape: craters, trenches and the ruins of a small octagonal dovecote (dove tower), once used for raising doves.  They are all still there, but now they’ve been filled in a bit by the passage of time, dirt, moss and mushrooms and obscured by shadows of regrown trees.   Walking on the little battlefield, with its lush tree canopy, thick woods and utter silence makes it a great place for introspection and contemplation.  But the same isolation permits one to vividly imagine the sounds and smells of battle that went on in 1918.

It’s hard to believe that so many men were wounded or killed in the little forest, which the grateful nation of France has since renamed Bois de la Brigade de Marine (The Marine Brigade Woods).

Soon we were on our way back home.  What a great day trip!

If you have questions about trip planning to explore the World War I battlefields of France, then email me at info@usaww1.com.  Bon voyage, Narayan Sengupta.

Narayan Sengupta is the author of books such as “American Eagles”, “Lafayette Escadrille”, “POW Stories” and “Disaster at Dieppe”.  To order them or to read more of his writing, see http://www.usaww1.com/History-of-the-United-States-Air-Service.php4 .