Sergeant Stubby: How a Stray Dog and His Best Friend Helped Win World War I and Stole the Heart of a Nation
Reviewed by Jim Gallen


Sergeant Stubby: How a Stray Dog and His Best Friend Helped Win World War I and Stole the Heart of a Nation
by Ann Bausum and David E. Sharpe
Published by National Geographic, 2014 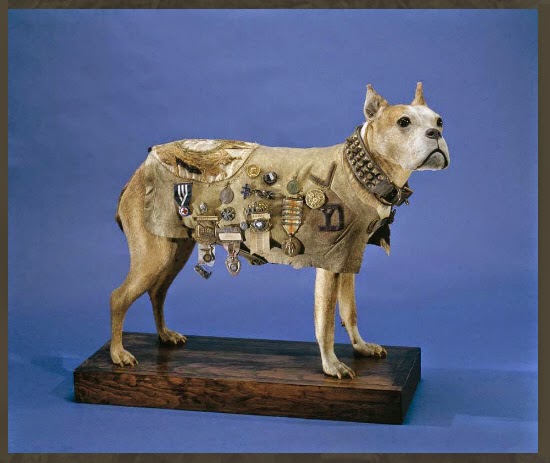 Most war heroes enter with two legs and the lucky ones end that way, although many Great War veterans came home with one or no legs. "Sergeant Stubby" had a double dose of luck to enter and leave the war with four legs. War dogs have long played their parts. Some sniff out bombs, others find the wounded, and then there are those like Sergeant Stubby who do what a dog does naturally: just be the warriors' best friend. He was an American Bull Terrier stray who adopted a soldier, Robert Conroy of the 102nd Infantry of the 26th "Yankee" Division, (who probably thought he adopted Stubby) at the training camp at Yale University.


Stubby shared the chow, returned salutes, was smuggled aboard the troopship, came under fire, helped capture a prisoner, and became the mascot of the 102nd. Stubby had a uniform bedecked with Conroy's medals and returned home to become the mascot of the mascots. In shows and Victory Bond rallies he represented all those canines who comforted the warriors in their loneliness. General Pershing personally decorated Stubby and every U.S. president of Stubby's lifetime bent to shake his paw. Back home he became Georgetown University's "Bulldog", a mascot that continues to the present. In death Stubby's remains were preserved and today they are on display at the Smithsonian's National Museum of American History.


The life of the American solder is woven into Stubby's saga. While exploring the French countryside with Stubby, Conroy found "real mud", "slippery yellow clay which hangs to your shoes and more and more keeps collecting". Upon disembarkation the troops piled into boxcars, the "40 & 8"s, so named because they could carry 40 men or eight horses. One became a "40 & 1", carrying as it did, "40 hommes et 1 chien". Sleeping soldiers were awakened by Stubby when gas approached. Grenade throwing was a contest between British underhand "cricket" tosses and American overhand "baseball" throws. Readers are introduced to competing theories of the origin of the term "Doughboy". Home front hardships such as meatless Mondays and wheatless Mondays and Wednesdays and porkless Tuesdays and Saturdays are introduced through Conroy's sister, Margaret.

Author Ann Bausum's writing is a narration of war, the life of the soldier and his dog. It is a light, easy read that familiarizes the reader with the day-to-day routine of the American troops in World War I and the surprising role that pets played in their days. Much of the details of Stubby's life are based on conjecture, "he would have" or "he must have", although many of his appearances are documented. A real dog lover would probably find this to be a heartwarming story. For me it is history lite.


We remembered Sgt. Stubby in an earlier posting at Roads
Click Here