Admiral Sims Had a Different Approach Than General Pershing Did 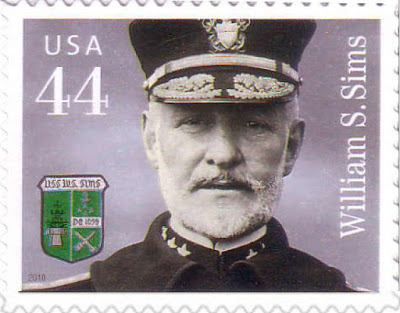 Admiral William S. Sims (1858–1936) was commander of the U.S. Naval Forces Operating in European Waters during World War I. Before the war he had been an enthusiastic reformer and modernizer for the navy.  In some ways America's navy had come into the war better prepared than its army. However, the growing fleet of capital ships, due to be enlarged with the 1916 naval expansion program, was not what was needed in 1917 when the United States entered the war. Sims arrived in London on 10 April, four days after Congress declared war.

Two battleship divisions would eventually be deployed to European waters, but the immediate challenges the nation faced forced the planning for big-ship operations aside and sent the navy scurrying in new directions. Dreadnought and cruiser construction was delayed in favor of urgently needed destroyers and other light craft to combat the mounting German U-boat menace that threatened to cut the indispensable supply line to North America. Within a month of the congressional declaration of war, Destroyer Flotilla Eight crossed the Atlantic to join the Royal Navy anti-submarine patrol force in Queenstown (now Cobh), Ireland.

In May, the Cruiser and Transport Force was formed to convoy American troops to France — a task it performed without loss of life for two million Doughboys. Obsolescent battleships and cruisers were usefully employed in protecting trans-Atlantic supply and troop convoys. In June the first naval aviation units reached France. By November 1918, the Navy had expanded from 80,000 men and 12 thousand reservists to 560 thousand men and officers. Eventually, some 16,000 sailors and 500 naval aircraft operated from bases in England, Ireland, France, Gibraltar, Corfu, and Italy. In December 1917, five American dreadnoughts joined the Grand Fleet at Scapa Flow. A second battleship division followed and was based at Bantry Bay in Ireland. By May 1918, the first of 121 American wooden 110-foot subchasers were operating in European waters. Two months later, the U.S. Navy began laying the first of 56,610 mines in the North Sea anti-submarine barrage.

Unlike Pershing (who was instructed to build an independent U.S. fighting force), Admiral Sims as a matter of U.S. policy put his men, ships, and aircraft under command of the senior Entente officer in their operating areas. By drawing on British experience, the U.S. Navy was able to make an early and effective contribution, particularly in promoting and supporting effective convoy operations, which eventually broke the back of the German submarine offensive. Other American contributions to the air and sea wars are less clear cut and more controversial, particularly with regard to the massive 34,000 square-mile North Sea mine barrage. Nonetheless, U.S. Navy command relationships with European navies, the British in particular, were cordial and productive despite policy disagreements revolving around British resistance to American calls for aggressive attacks on German home bases.