Editor's Note: We presented brief article on this famous object in 2014, but I recently came across a much more thorough discussion of it from the Virginia Museum of Fine Arts. MH

Greater love hath no man than this,
that a man lay down his life for his friends.


So reads the gilt inscription from the Bible that fills the central band of this opalescent-white enamel egg embellished with two red crosses. A closer look at this treasure also reveals an intricate pattern underneath several layers of enamel, created by a decorative engraving technique known as guilloché. 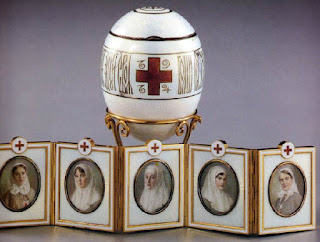 This is the 24th Imperial Easter Egg that Faberge designed for the Romanov royal family. He created his first for Alexander III in 1885 after being appointed “Supplier to the Court of his Imperial Majesty.”

On top of the egg, is the Cyrillic monogram and crown insignia for the Dowager Empress Maria Feodorovna — Emperor Nicholas II’s mother; while the two red crosses are bordered at each corner by the dates 1914 and 1915.

It was in August of 1914 that Russia entered World War I by declaring war on Germany and Austria. In less than six months, over a million men were killed, wounded, or taken prisoner. In the spring of 1915, Nicholas II presented this Imperial Easter Egg to his mother, who was president of the Red Cross. That same year he would travel to the front line to take personal command of the army.

The simplicity of design and austerity of materials — there are no gemstones used here — reflect the mood of the country. The Fabergé workshops were beginning to produce war supplies, and their London branch was closed down, but that didn’t prevent the House of Fabergé from creating a memorable and beautifully crafted surprise inside this egg.

A gold-trimmed folding screen contains five one-inch oval portraits topped by tiny red crosses. Each miniature painting is surrounded by panels of white guilloché enamel and backed by mother-of-pearl inscribed with the initials of five women who were near and dear to both Nicholas II and his mother. Dressed as Sisters of Mercy, they are from left to right, his sister Olga, his oldest daughter, also named Olga, his wife Alexandra, his second daughter, Tatiana, and his cousin Maria Pavlovna.

True to their cause, the Empress Alexandra and her two eldest daughters did tend the wounded and dying soldiers in a hospital she organized at the Imperial Winter Palace.

This Imperial Red Cross Easter Egg, which was confiscated by order of the Provisional Government in 1917 for safekeeping, was eventually acquired by Lillian Thomas Pratt in 1933.

Found at the Website of the Virginia Museum of Fine Arts