"The Weight of Sacrifice" conceived of by lead designers architect Joseph Weishaar of Chicago and New York sculptor Sabin Howard has won the international competition for the World War I National Memorial. We will have much more on their design and its progress through the review process, and we will also be sharing information with our readers on how you can contribute to the funding of this great venture. For now, here are some images of the memorial with some of the designer's views on their concept.

The idea that public space and public freedom are hard won through the great sacrifices of countless individuals in the pursuit of liberty provides the original design concept for this project. – Designers' Statement 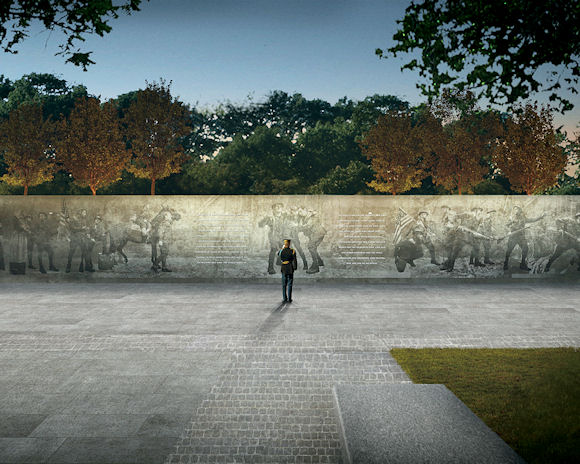 Above all, the memorial sculptures and park design stress the glorification of humanity and enduring spirit over the glorification of war. These themes are expressed through three sources: relief sculpture, quotations of soldiers, and a freestanding sculpture. This is a moment frozen in time, captured in the darkened bronze form which has emerged from the soil to serve as a reminder of our actions. Along the north and south faces we see the emblazoned words of a generation gone by. One hundred thirty-sevenfeet long, these walls gradually slip into the earth drawing their wisdom with them. Around the sculpted faces of the monument the remembrance unfolds. The quotation walls guide visitors around the memorial through the changes in elevation, weaving a poetic narrative of the war as described by generals, politicians, and soldiers. 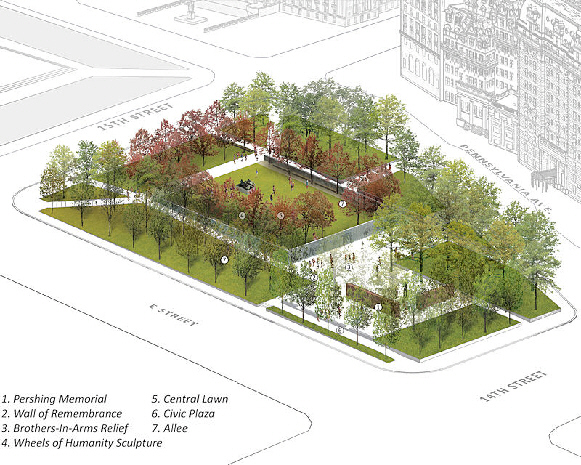 The integration of a park around and atop the memorial alludes to the idea that public space and personal freedom are only available through the sacrifice of our soldiers. A memorial and a park built to represent this truth should pay homage to the loss incurred in securing these freedoms. The raised figurative walls visually express a narrative of the sacrificial cost of war, while also supporting a literal manifestation of freedoms enjoyed in this country: the open park space above. The urban design intent is to create a new formal link along Pennsylvania Avenue which ties together the memorial to Tecumseh Sherman on the West and Freedom Plaza on the East. This is achieved by lowering the visual barriers surrounding the existing Pershing Park and reinforcing dominant axes that come from the adjacent context. 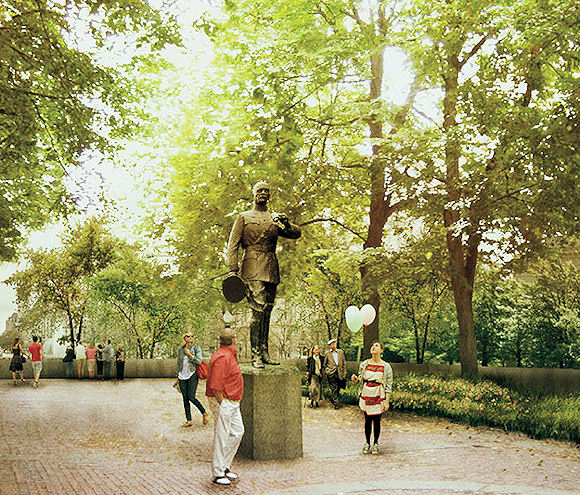 The fall sun settles on a soldier's etched features (General Pershing himself), and above him 28 trees rise up from the earth, flamed out in brazen red to mark the end of the Great War. He stands on the precipice of the battlefield, surveying the rising tide which has come to call his brothers from their havens of innocence. The figures before him emerge slowly, at first in low relief, and then pull farther out of the morass as they cross the center of the wall. They all trudge onward, occasionally looking back at the life that was until they sink back in and down into the trenches. The raised form in the center of the site honors the veterans of the First World War by combining figurative sculpture and personal narratives of servicemen and women in a single formal expression. 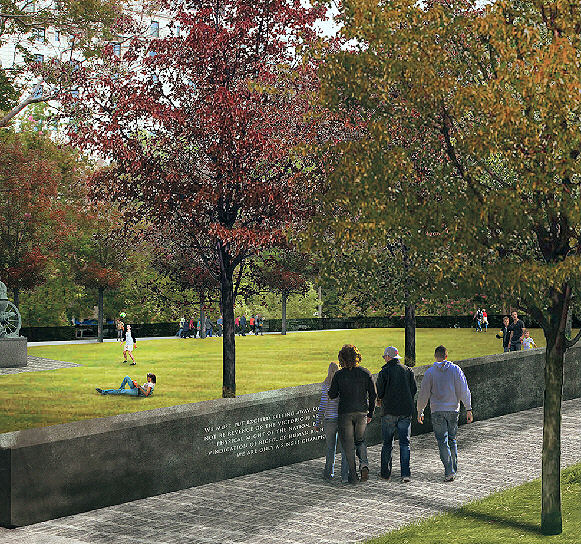 Upon this unified mass spreads a verdant lawn. This is a space for freedom built upon the great weight of sacrifice. The sculpture on the upper plaza, “Wheels of Humanity,” recreates the engine of war. These are soldiers tested and bonded by the fires of war to each other and to the machinery they command. For all of the courage and heroic stature they convey, each looks to the other for guidance and a signal to action. The bronze medium used throughout stands for the timeless endeavor we face in the universal pursuit and right of freedom. 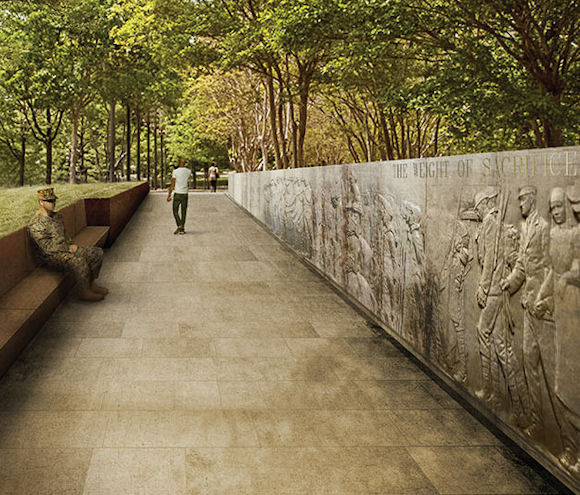 The figurative relief sculpture, entitled “The Wall of Remembrance,” is a solemn tribute to the resilience of human bonds against the inexorable tide of war. The 23 figures of the 81-ft. relief transform from civilians into battered soldiers, leading one another into the fray. The central piece, “Brothers-in-Arms,” is the focus of the wall, representing the redemption that comes from war: the close and healing ties soldiers form as they face the horrors of battle together. The wounded soldier is lifted by his brother soldiers toward the future and the promise of healing.